Jimmy Hoffa and the corrupt side of the Teamster Union 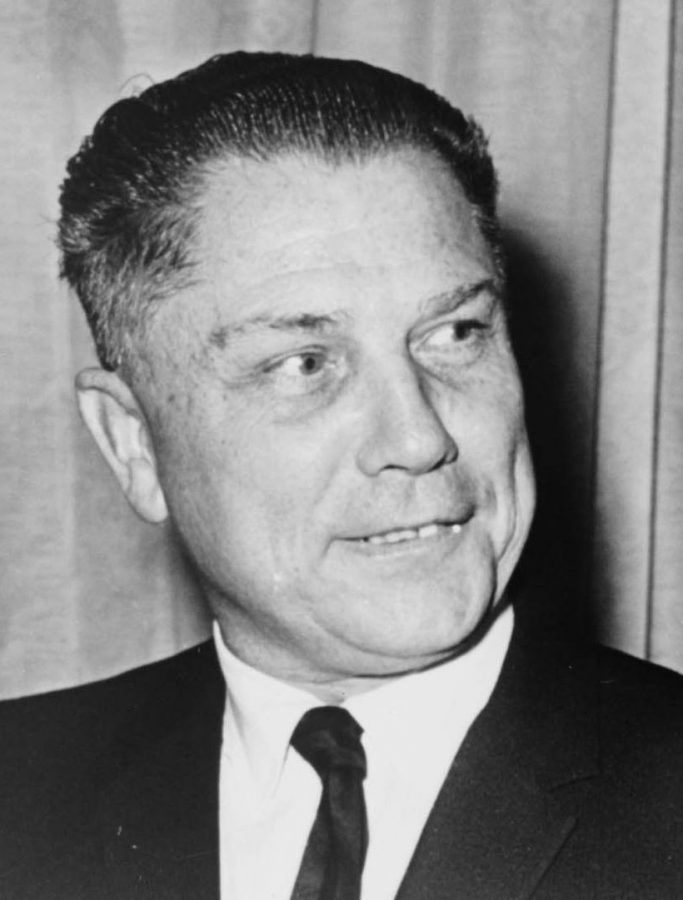 Jimmy Hoffa, president of the Teamster Union, has returned to the public eye with the release of Scorsese's "The Irishman"

The Teamster Union is one of the largest organizations in America, and potentially one of the most corrupt.

Most Americans probably know about unions, and once in a while people hear about a teacher strike or a company going on strike. The union is the organization that helps resolve those issues. Today’s unions are usually very well-organized and no longer corrupt, but there was a time when the Teamster Union and the mob were almost one in the same.

The Teamster Union was founded in 1903. Cornelius Shea was the first Teamster president from 1903-1907. He was notorious for being tried for crimes and even being in prison for attempted murder. During Shea’s term many major strikes occurred, like the Chicago City Railway and the Chicago Meat Cutters. In 1905, 10,000 Teamsters went on strike in support of the workers at Montgomery Ward. With all the scandals and indictments, Shea finally lost the 1907 election to Daniel J. Tobin, 104-94.

The Teamster union finally got their feet off the ground under Tobin. Daniel Tobin was union president for 45 years. Joint Councils, one of Tobin’s proudest achievements, was enacted where all local unions had to have a joint council that would solve problems. Tobin strongly opposed going on strikes and encouraging order within the union.

Unions became more popular, and by 1935, membership was at 135,000. By 1941, the Teamster Union became the fastest growing union in North America. When Tobin stepped down in 1952 , David Beck became president, despite facing opposition. Many leaders and Teamster members complained that he was corrupt. Beck faced many challenges during his term, like the milk strike in New York City, although he did build the Marble Palace, the Teamster headquarters. Jimmy Hoffa saw how Beck struggled and successfully beat him in the 1957 election.

Jimmy Hoffa is best known for having mysteriously disappeared, but Hoffa was one of the most popular men in America during the 50s and 60s. Hoffa is responsible for establishing Las Vegas, and why most of your parents will get a pension when they retire.

When he was elected, Robert F. Kennedy immediately investigated him for fraud. The Hoffa vs. RFK rivalry was one of the most popular news stories of the 60s. When RFK decided to publicly investigate Hoffa, the mob was furious.

There is evidence that the mob helped JFK become president.  The unspoken deal was the mob would help JFK become president and JFK would lay off investigating the organization, but RFK had different plans when his brother appointed him Attorney General. RFK even had a “Get Hoffa squad.” Now you may be thinking all of this information was in The Irishman, but all of this is true. RFK never got Hoffa, but he was charged with fraud and sent to jail in the late 60s. Jimmy Hoffa never killed anyone, but he sort of had Frank “The Irishman” Sheeran kill people for him. Ordering a hit is not like the movies they never say kill anyone they just give him a look and they do it.

Anyway, Hoffa used the pension fund as a bank account and so did the mob. Hoffa would use the Teamster’s pension fund to invest in mobster-owned casinos and hotels. Ultimately, Hoffa was a bad guy who did lots of good things. He united all freight drivers under an agreement, created the pension fund and much more. However, in 1967 he was sent to prison. Even when Hoffa was imprisoned, he still ran the union through Frank Fitzsimmons. Hoffa was smart and he remained friendly with the mob, installing trusted members to different local unions, making sure he still had power.

When Jimmy Hoffa got out of prison, after being pardoned by Richard Nixon, he tried to get his union back. When he started to campaign and re-enter the Teamster Union, he angered many members of the mob. He started talking about naming names and making the Union more honest, angering a major member of the mob, Anthony Salerno, who was most likely essential in Hoffa’s disappearance. Allegedly in one big night where the mob agreed Hoffa should be killed, Russell Buffalino (leader of the Buffalino crime family) told Frank Sheeran (hitman for the mob close friend to Jimmy Hoffa) that they did all they could and that Hoffa needed to be “taken care of.”

Hoffa was aware the mob was mad at him, but wouldn’t back down and continued to threaten he would name names and release tapes he had of incriminating conversations with mob members. There are two plausible theories about Hoffa’s disappearance: one is Hoffa’s long time rival, Tony “Tony Pro” Provenzano, had him killed and cremated, but the more likely theory is that Frank Sheeran shot and killed Jimmy Hoffa in a hit house and cremated him.

Although the truth will never be known, Frank Sheeran admitted to killing Hoffa. That theory is disputed, however, because historians say that Sheeran admitted to the murder to sell books. The book was called, “I Heard You Paint Houses.” In the mob, the term “paint houses” means to kill people and the blood is the paint.

Currently there are 1.4 million members in the Teamster Union, and the current Teamster president is James P. Hoffa, Jimmy Hoffa’s son.