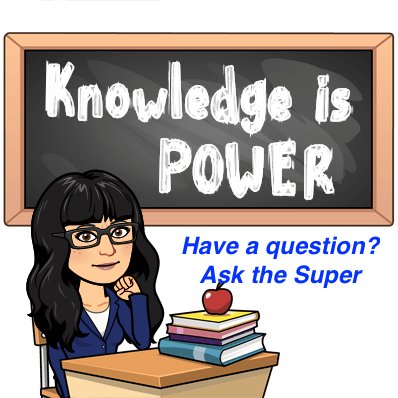 Look for the "Ask the Super" logo on Del Val's homepage to contact the superintendent.

Have you ever been curious about how snow days are decided? Or if Del Val will ever have a turf field? Delaware Valley’s newest feature, Ask the Super, will answer these questions and more.

Ask the Super invites students, parents, and community members to reach out to Superintendent Daria Wasserbach concerning any school-related policies or practices they are curious about. All you have to do is send an email to askthesuper@dvrhs.org and you will have all of your questions answered within 24 hours.

Ask the Super began as a way to address any misconceptions students or parents may have concerning the school and to better educate them on the decisions Del Val makes. “Part of the district’s goals this year is really to promote Del Val to the community, help folks understand all of the really good things that are happening here, and help correct some of the misinformation that often gets out into the community, frequently through social media,” Wasserbach said.

Wasserbach has already received a good amount of quality questions since the program took effect and is happy to see Ask the Super in use. If Wasserbach doesn’t have the answer to a particular question readily available, she is dedicated to finding it.

While Wasserbach does her best to thoroughly answer every inquiry to the best of her ability, it should be noted that some topics cannot be discussed via Ask the Super, such as personal matters that violate a student’s, or anyone else’s, privacy.

One particular aspect Del Val is currently working on that Wasserbach would like to highlight is the school’s rebranding campaign. While multiple projects have been initiated, the most significant ones include deciding on the school’s official colors, modifying the current logo, and establishing an official tagline.

Wasserbach says all final decisions will most likely be announced at Del Val’s Jubilee Jamboree, which is scheduled to be held in May of 2020 to celebrate the school’s 60th anniversary.

In addition to Ask the Super, Del Val has also introduced Terrier Talk, a monthly cable TV and YouTube segment hosted by Wasserbach, with special appearances by other staff members. Each episode discusses a new feature or event taking place at Del Val, while answering commonly asked questions via Ask the Super, ensuring that students and their parents are entertained and informed. You can watch December’s episode, “Snow Stopper,” above.

Ask the Super ultimately aims to offer insight into Del Val and everything that goes into the process of education. “We want to give students, parents, [and] the community a direct line to get their questions answered,” Wasserbach said.

If you have any questions you would like answered, or school processes you would like explained, Ask the Super is the most efficient way to acquire accurate information from Del Val’s Superintendent herself.