Make sure to “Catch” this year’s winter musical 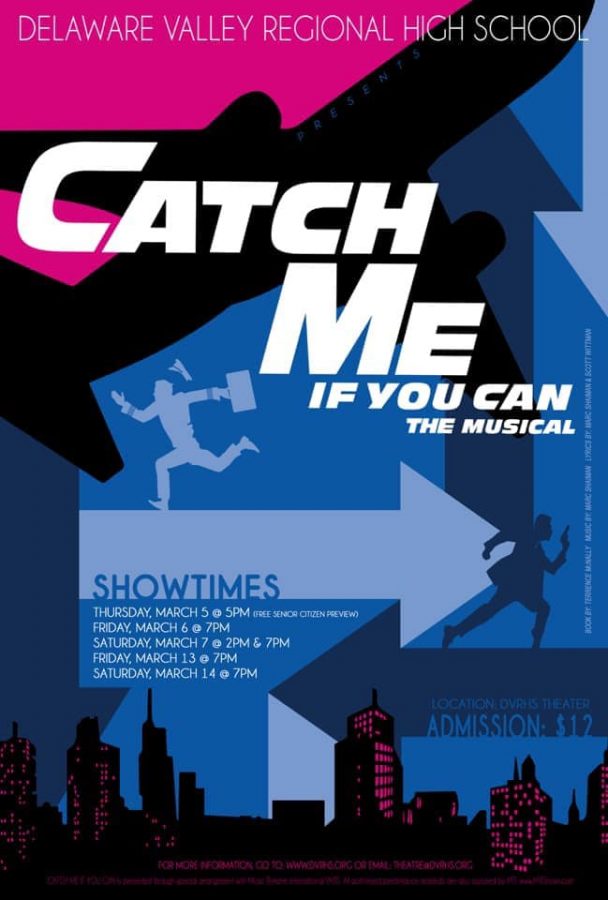 If you’re looking to see a show filled with drama, crime, romance, singing and dancing around every corner, look no further than this year’s Winter Musical at Del Val!

What’s the musical you ask? This year’s show is Catch Me If You Can, a story following a 16-year-old boy living the life of a con man on the run.

The story is based off of an autobiography written by Frank Abigail Junior, and it was later adapted into a movie starring Leonardo DiCaprio and Tom Hanks before it was brought to Broadway. The audience will witness Frank use his wit, confidence, and forgery skills to dupe countless people and rake up millions, all with elements of song and dance to keep the audience on the edge of its seat!

As for the cast, according to the show’s director, Mr. Ambs, the ensemble has a lot to offer with a senior-dominated group.  With a cast of 32 students, the musical is full of talent ranging from the massive bunch of seniors to the promising underclassmen. The lead is played by senior, Thai Branowski, and his special agent pursuer is played by another senior, Hunter Trstensky. Other key actors include senior, Liz Kelly, and Juniors, Bryant Kessy and Kayla McKinnon. As for the freshman class, Mr. Ambs notes “there is a lot of talent in the Freshman class both onstage during the show as actors and also helping out backstage.”

The show opens on March 6 to the general public at 7 pm and March 7 at 2 pm and 7 pm. Additionally, for the first time ever, showings will carry over into the following weekend at 7 pm on both March 13 and 14.

Mr. Ambs assured that the cast will no doubt be ready on opening night, and the audience should look forward to “a wonderful blend of great singing, dancing, acting, technical effects, and awesome adventures,” so make sure to catch this show this weekend or next…if you can!