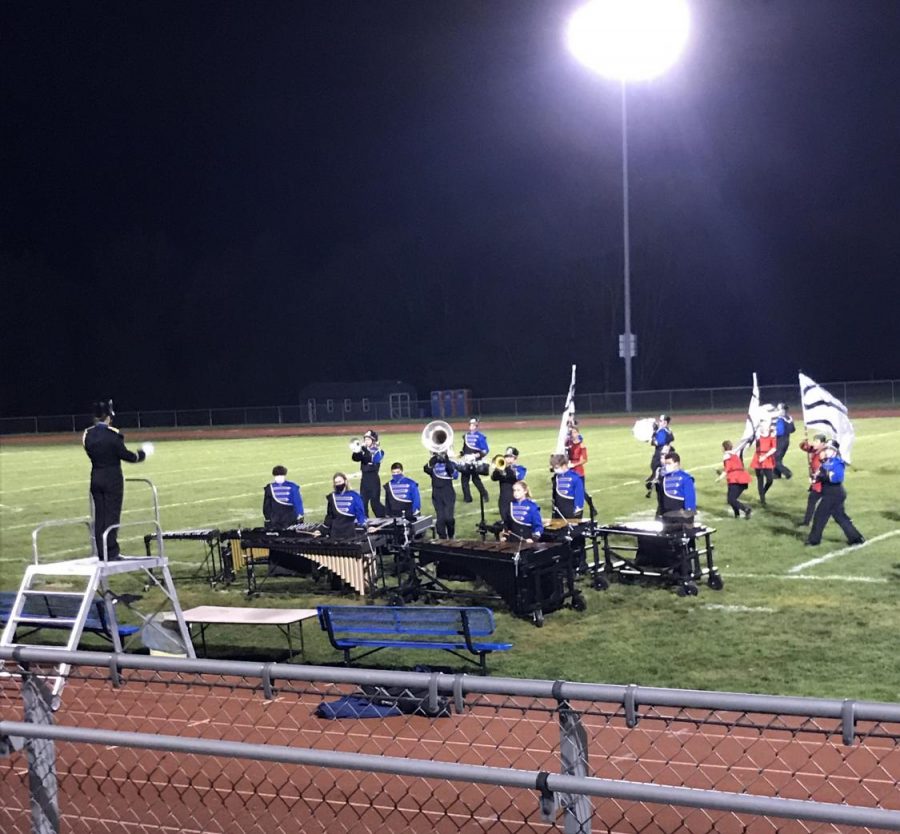 Delaware Valley Regional High School’s marching band is performing a show this year called “No Capes,” which contains the music from the movie, The Incredibles.

Directed by Thomas Hayden and assisted by Ben McPherson, the show will be one for the books. The show’s staff comes together with Jenifer Wrede leading the Color Guard, Sean Jaco leading the percussion, and Maddy Clyde, Emma Foreman, Ioannis Skoulidas, Simon Kinderman, Ryan Sandor, Rebecca Sutton, and Grace Nerwinski as student leaders.

Mr. Jaco and Ms. Wrede are new to the marching band team this year, and they bring a lot to the table. “The come up with ideas I have never heard before,” Mr. Hayden explained. “They also bring a different level of excitement to the band members.”

Initially, Mr. Hayden was worried about doing marching band in light of the COVID crisis. “When I saw students following regulations, wearing masks, socially distancing, I became more comfortable,” Mr. Hayden said. Additionally, band members must complete a temperature check upon arrival to any practice or competition. Equipment that stays at the school must be sanitized, and equipment that can be taken home has to stay with the student.

This year, the marching band show is different compared to past years’. “This show is like one big song,” Mr. Hayden said. He went on to explain how different movements have different smaller songs. Previously, the songs in a show sounded different but fell under the same category.

On Monday nights, the band performs at 8 p.m. on the football field. “If you want to come, make sure you wear a mask and practice social distancing,” Mr. Hayden explains. As of now, there is a 500 person limit on who can come and see the show. Monday night performances are free, but when the band performs at home football games on Fridays, tickets need to be purchased online.

Even as the season comes to a close, the band hopes people will come to watch them at the home football games. Plus, with the addition of special effects, the show will be even more eye catching.

Overall, the band is very excited about the show No Capes and is looking forward to future audiences watching and enjoying the performance.