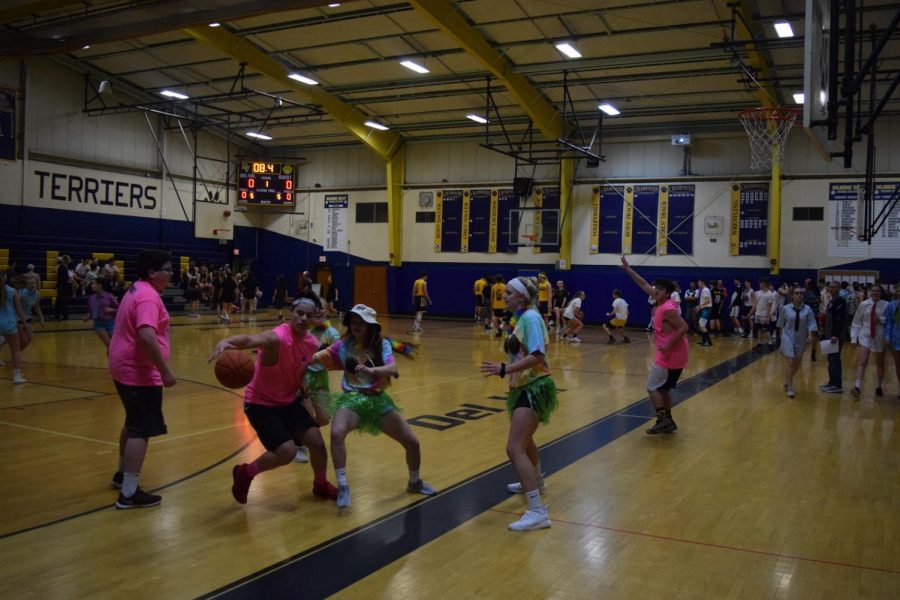 Del Val continues its tradition with its twentieth annual Hoops for Heart event (which had previously been a Jump Rope for Heart event), a highly anticipated fundraiser that brings awareness to, and raises money for, the American Heart Association (AHA) through the game of basketball. Thirty-two teams participated on the morning of February 14, leaving their first and second period blocks to join their teammates and get into uniform. Both of the gyms were filled with enthusiastic students, music, and energy. Team sizes varied, with some consisting of only three people and others sporting up to nine. Per team, a minimum of $90 was raised, with the maximum being $270+ per team. According to Mrs. Given, Del Val continues to participate  and raise money for the AHA because it is a great charity to contribute to, and the event is a great way to keep students active.

The tournaments began with three players from each team on the court and a timer set for 3 minutes. When the buzzer sounded, and every team rotated their players for a second, 3 minute period. After the final buzzer, the zealous teams reported their wins and moved courts for the next game. During the games, The Delphi staff was able to interview various teams to hear their opinions of the event as a whole, as well as their chances of winning. When speaking with the teams, the staff consistently found enthusiasm and optimism, no matter what each team thought the outcome would be. The Flu Shots, whose team captain was Sam Hansen, raised $180 for AHA. The girls were very excited, with their leader expressing her faith in the team. When asked, one of the girls on the team told The Delphi that she had a connection to the event, stating that people in her family have suffered from heart problems. This was just one of many enthusiastic teams with similar stories competing that day.

In addition to team commentary, The Delphi staff was able to interview some of the DVTV students about their experience, as well as DJ Aidan Fernandez. First year TV Media student, Alan Dursee, enjoyed his first year covering the event, expressing how his work that day was a good, real-life experience, and it served as a good learning opportunity. In addition, Alan expressed his interest in helping charities, so Hoops for Heart was the perfect fit! Del Val senior, Andrea Pederson, was also covering the event, along with many other TV Media students. This was Andrea’s third year in TV Media and her second year covering Hoops for Heart. Consistently, she has found it to be a good learning experience and enjoys being a part of the event, saying how the team spirit from everyone is her favorite aspect.

As the fundraiser came to a fast close, the winning teams for the overall tournament were announced, along with the team with the most creative uniforms. “The Gremlins,” composed of Lucas Romaine, Jack Bender, Jack Willard, Joe Cansfield, Jack Norgard, Lane McCarty, Tyler Blake, and Liam Miller, rose to the top as the winning team for the competitive bracket, and Team 30, “The Kaufgang;” composed of Andrew Neal, Will Kauffman, Carol Ann Brederson, Ellie McNamara, and Matt Diem; as well as Team 3A, composed of Kaitlyn O’Boyle, Bridget Daunton, Ashley Folmer, Jackie Huber, Cristina Calcavecchio, Victoria Panicaro, Mikaela Scott, Skye Bundt; tied for the less-competitive bracket. With their brightly striped shirts and glittery faces, team “No Honey, Mo Problem” won the title of best-dressed. Most importantly, however, Del Val’s Hoops for event was able to raise $6,995 for the American Heart Association. The event was the perfect way to honor Valentine’s Day and join together to support a great cause.