The Many Saints of Newark: An imperfect masterpiece 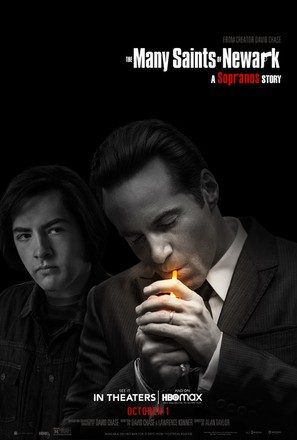 The theatrical poster for The Many Saints of Newark

Fans of The Sopranos have been waiting for a movie since their TV screens cut to black 14 years ago, and here it is. But is it the movie Sopranos fans wanted? Or even needed? The Many Saints of Newark is, as the title reads, an imperfect masterpiece.

The movie doesn’t wrap up any unanswered questions, so what purpose does it serve in The Sopranos universe? Fans now know who killed Dickie Moltisanti, but other than that, viewers didn’t learn anything new from the movie. Actually, we did learn that Junior was always a sensitive baby whom I didn’t feel bad for at the end of the show’s run. That’s cold, I know, but he was a murderer.

If we never got a follow up movie or even a limited series, fans would have died disappointed they never got to see the making of Tony Soprano or to know how his life ended (he was definitely shot and killed in the final episode).

The Many Saints of Newark isn’t a bad movie; it’s a great movie to grab some gabagool, relax, and watch a prequel about the greatest television show of all time. The acting all around is great (except for Silvio) and the directing is fine, but it’s the screenplay that did me in.

The screenplay was surprisingly mediocre. The Many Saints of Newark was written by The Sopranos’ creator David Chase and co-written by a former writer for the show, Lawrence Konner.

Every time I thought a prolific line was about to come out of Dickie’s mouth, he would say something that belonged in the script of Gotti. Every couple of minutes David Chase would throw fans a bone and do a callback to the show, making all Sopranos fans go, “Oh hey, that’s what Junior said in Season 2 episode 7.” If you are that person, “it’s over, find a new show.”

The acting is superb. Much like a team run by Bill Belichick, everyone does their job very well. It’s early to start predicting who will be nominated for an Oscar, but Vera Farmiga made a good case to be nominated for Best Supporting Actress. She would’ve stole all the scenes she was in, but unfortunately for her, she shared many scenes with James Gandolfini’s son, Michael Gandolfini, who played the young version of Tony Soprano. And he absolutely killed it, down to every last detail. It’s scary how well Michael Gandolfini was able to portray the character his dad once did.

Ray Liotta’s laugh was perfect in The Many Saints of Newark. The sound of his laugh, the face he makes when he does his version of laughter and the effect of his laugh puts him in the discussion for best fake laugh in movie history.

The overall aesthetic of the movie makes it instantly re-watchable. Because, let’s face it, whether you liked the movie or not, you’re going to rewatch it at least 20 times. The movie did a great job of capturing what Newark and other parts of northern New Jersey looked like in the late 60s and early 70s.

You might be saying, “But Joe, you weren’t alive, how would you know?” I know because New Jersey hasn’t changed at all since the 60s, architecturally, socially, and politically. People who think northern New Jersey has been gentrified are sorely mistaken, and this movie does a great job of capturing the look of New Jersey.

Bringing back Alan Taylor to direct and David Chase to write the screenplay were also good choices. I know earlier I said the screenplay was mediocre, but David Chase had to be the one to write this movie; he just had to be. If he didn’t write it, every fan of the The Sopranos would’ve raged harder than Tony Soprano when he found out Ralph killed his horse.

Alan Taylor directed many episodes of The Sopranos and knows the show like the back of his hand, and he proved it by doing a fine job directing the movie. He just didn’t do a great job.

Tony tries to connect with his mom, but she makes it impossible with backhanded remarks and harsh criticisms. What did fans expect going into this movie, Tony’s mom to be nice? After all, she did try to have her son whacked.

The use of Leslie Odom Jr.’s character, Harold. Harold was introduced into the Sopranos universe to try and show what was going on in the 1967 Newark riots. Unfortunately, Harold doesn’t do much to advance the movie’s plot, and although he is given one last scene in the post-credits, his character disappointingly falls short.

Silvio. The actor who played Silvio, John Magaro, must’ve thought he was taking part in a SNL sketch rather than a big budget movie, because his impression was terrible. It was fun to see a bald Silvio for the first half of the movie, and then watch him magically “grow” a full head of hair towards the end, but Magaro left fans wondering why he was chosen to play such a key character in the movie.

I put David Chase in the good section because he’s the creator of the greatest television show of all time, but I never said the screenplay was good. I said it was good to have Chase write the screenplay because it was his show, and fans would’ve been pretty upset if he didn’t write the script.

The callbacks were fun, but other than that, the screenplay fell short.

The Many Saints of Newark was a good movie, but the problem was it wasn’t great.

Fans of The Sopranos expect nothing less than perfection, so when they got a movie that was just alright, they felt disappointed. Because the movie was written by the creator of the show and directed by a guy who was heavily involved in the making of the show, I can’t help but be surprised by the end product.

The ending is undeniably great, however. A young Tony Soprano staring at his dead uncle and mentor, vowing to finish what he started, and the movie’s deceased narrator, Christopher Moltisanti, saying, “That’s the guy, my uncle Tony, the guy I went to hell for.”