Why gun laws need to be better 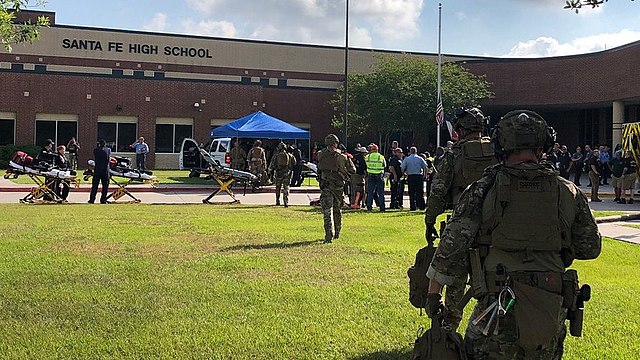 The 2018 school shooting at Santa Fe High School is just one example of the need for change in gun safety.

According to Education Week, there were 34 school shootings in America in 2021 as of December 20.

School shootings have become so common that people from other countries use them as a defensive strategy in online arguments and as jokes on TikTok.

A shooting that particularly shook the country, though, was the Oxford shooting, taking place November 30, 2021. That rampage left 4 dead.

The parents of the shooters were even arrested as well, charged with 4 counts of involuntary manslaughter after the county prosecutor said they had allowed their troubled son to get his hands on a firearm.

While that shooting was the most prominent, 8 more had happened after it.

Earlier in the year, March 1, a 15-year-old was shot and killed in a hallway full of people. On May 5, another 15-year-old had shot himself in front of 3 other kids. The next day, May 6, a sixth-grader, had opened fire, wounding 3 people, 2 students and a custodian.

Keep in mind, most sixth graders are between 11 and 12-years-old. How or why did a 11 or 12 year old get a firearm, carry it into school and fire the gun?

If parents own firearms, they need to know how to secure them safely, making sure that their children cannot get their hands on the guns.

In mid-December, 15 senators and 99 House members, who were all Democrats, had sent a letter to Miguel Cardona, the U.S Secretary of Education, urging him to raise awareness about the importance of gun storage. They want to encourage school districts to teach parents how to properly store their firearms to keep them away from the hands of their children.

School shootings have caused nothing but pain and grief. How many parents have said goodbye to their children, sending them off to school to never see them again? How many more times does that have to happen before people open their eyes and realize that guns are being used for more bad than they are good.