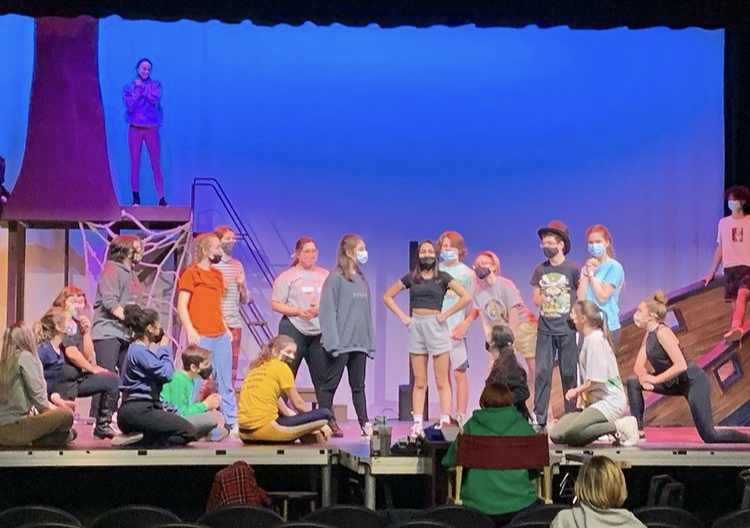 The cast of Peter Pan prepares for opening night this Friday March 4.

Delaware Valley Regional High School is known for its award-winning musicals, but what goes on behind the scenes in the weeks leading up to opening night?

The cast and crew of Peter Pan experience the struggles and successes of tech week as they prepare to share their show with audiences this upcoming weekend.

“I think absolutely everything about tech week is exciting,” said freshman Jess McGlothlin (Wendy Darling). “You get to see the whole show and cast come together. Tech week is when you get to add in all of the elements that really make the show, such as costumes and sets, and you are able to fully get into your character and be in their environment.”

With the completion of the set, actors can interact with their surroundings just as easily as each other, adding further layers to the production.

Audiences must be willing to use their imagination as they venture from one place to another in Neverland, as the sets for Acts II and III cannot be moved. This creates quicker scene changes and sturdier bases for the actors, but it limits the story in its complexity of design.

Other sets, like the Darlings’ nursery in Act I, are constructed and removed throughout the show. As the biggest scene change in Peter Pan, it can be difficult to manage and requires a lot of practice.

“Making everything look effortless is a very important, but extremely difficult, element of the show,” McGlothlin said. “We have a lot of set changes, crosses, location and group jumps, and just a lot of movement overall. My biggest concern is making sure it looks seamless and that the story is easily understood.”

Orienting oneself with a finished set can be one of the most trying elements of rehearsal, and adding costumes and props into the equation only adds to the challenge.

“In ‘I Won’t Grow Up,’ there are a couple of lifts and stunts that we do where my [microphone] tends to come off,” said Sophomore Swara Modi (Peter Pan). “I really hope that I can hide it in my costume and [keep it from] falling out.”

Small complications like these can quickly become disastrous in a real performance and must be corrected and perfected before the show premieres.

Rehearsing in full costume before performing in front of a live audience can be challenging, but it is necessary for all involved in the production. Those who oversee sound dynamics can finalize microphone levels over the presence of the orchestra, who will be performing below the stage.

Technical issues are normally resolved in the final week of rehearsal, sometimes only days before an audience views the show.

Peter Pan, though well-known and recognizable by many, incorporates few advanced technological elements.

Sophomore Dakota Krouse (Slightly) hopes that Del Val’s style of performance for this year’s musical will draw a large crowd.

“This show is really a story. It’s a story that plays out in a book format. There’s no big, flashy opening number or big, flashy finale. It’s quite literally a fairytale throughout the show. [This musical] is more of just the story that we all know and love,” Krouse said.

Much of the magic that is found beneath a show’s performative presence is attributable to the tight bonds of the cast. This year’s cast of Peter Pan is no different.

“There are a lot of elements that make [this show] so good and so magical. But [this cast] really brings Peter Pan to life, and since it’s my last musical here at Del Val, it’s very important to me that everyone comes together and works together as a family.” said senior Hannah Fey (Tiger Lily).

After two years without unmasked theatrical performances, cast and crew members are excited to create a production that will showcase their love of theatre and each other.

Senior Hunter Leeds (Mr. Darling/Captain Hook) believes that the amount of time this year’s cast and crew have spent together is evident in their onstage performances, creating an unmistakable familial bond.

“I’ve grown to love this cast so much. They’re all so incredibly talented and we’ve all spent so much time together. It’s going to be difficult to leave after our last show,” said Leeds.

After months of hard work and dedication, the Del Val theatre community is excited to put on an incredible show. Be sure to buy your tickets at the door or at lunch and fly away with them to Neverland.

“[Peter Pan conveys] the message that growing up is a necessary part of life, but reminds everyone not to rush,” says senior Hayleigh Marmorato (Nana/Smee). “It’s a family show that everyone should come [see] and enjoy together.”