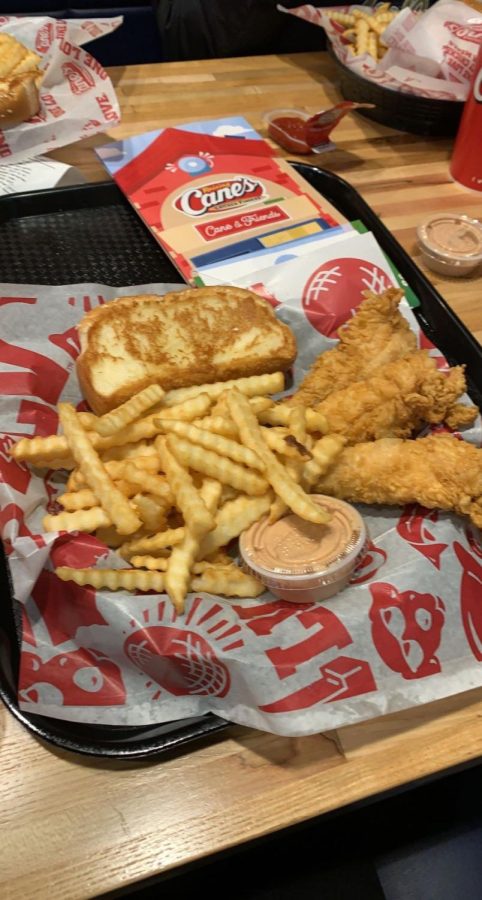 A few weeks ago, my family headed out to Columbus, Ohio for a cheerleading competition. Along the way, we stumbled upon a Raising Canes restaurant, which has been on our bucket lists for quite some time.

Due to the lack of dinner for our road trip, we decided to walk inside and check out this famous chicken fast food restaurant.

As of February 3, 2021, Raising Canes has approximately 515 restaurants nationwide. Although Canes is most popular in the Midwest, there are still some located in California and even one in Massachusetts.

As we walked in, we were immediately greeted by the nice cashiers. The walls were covered in stories and photos of earlier restaurants. There was a very small selection of food, as they only offer chicken fingers and a couple of side dishes. I decided to order the 3 finger combo, and Sara ordered the kids meal with a side of Texas toast.

Canes is most known for their secret Canes sauce, which came with the 3 finger combo. Being extremely excited for the sauce, that was the first thing to try. As a huge Chick-Fil-A sauce lover, I expected the Canes sauce to taste just the same. Unfortunately, it was very disappointing.

The sauce has a ketchup/mayo taste similar to Heinz “Kranch” sauce. The color was a beautiful salmon color, and the consistency was perfect. As a ketchup hater, the sauce gets a big “no.”

Sara started off her dinner with Canes fresh-squeezed lemonade, which is only available behind the counter. It was a decent glass of lemonade, but it wasn’t too fancy. Once the lemonade was about half way done, she decided to try the sweet iced tea, which was way better than the lemonade.

The chicken was thick, tender and juicy. The golden brown outside wasn’t too crispy, and the batter almost slid off the chicken finger. There wasn’t anything unique about it, and personally we both would never go back just for the chicken.

Canes crinkle cut fries are the signature fries. They were definitely cooked perfectly, getting a crunch on the outside, and a nice hot, fluffy potato inside. They were a little under-salted, but they made for the perfect side dish.

The famous toast that comes with the combo meals had to have been the best part by far. The outside was golden brown and topped with some sesame seeds. The inside was fluffy and a beautiful cream color. Whether it was the soft inside or the butter on the outside, it had me wanting more.

If we ever end up in the Midwest, I will be returning to this lovely chicken joint! However, there is no rush for Raising Canes to join the East Coast.