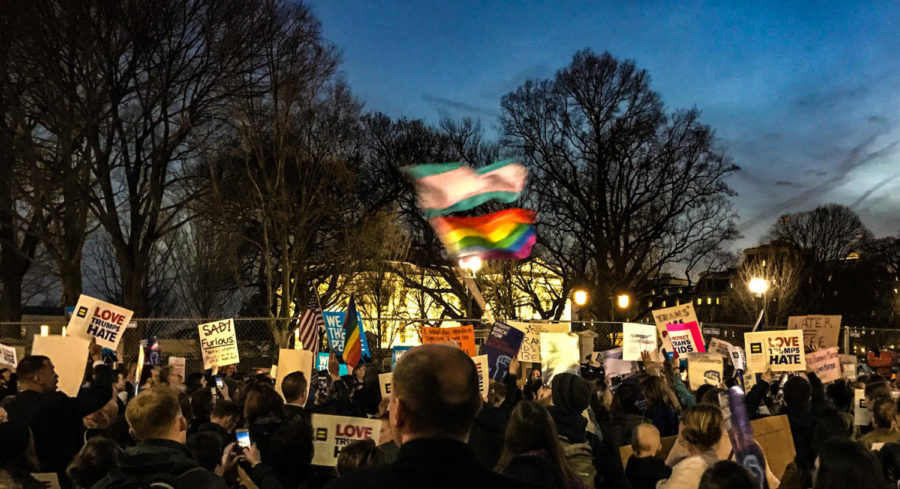 Community leaders, parents, kids, doctors, lawyers, assemble in front of the White House to protest the non-science based policy of segregating LGBTQ children in public schools based on the schools' determination of their gender identity.

Recently in Florida, there was a bill created called the Parental Rights in Education bill. However, it’s been more commonly called the “Don’t Say Gay” bill by people across the country.

On February 24, the House of Representatives approved and signed this bill, and on March 8, the U.S. Senate did the same.

This bill will limit what classrooms teach children about sexual orientation and gender identity. These lessons about such topics are prohibited from being taught in kindergarten through third grade curriculums. This bill allows parents to sue the schools and teachers that teach these topics in their classrooms. Not only can that ruin the school forever, but it can also put the teacher in financial trouble.

As of March 28, 2022, Ron DeSantis has signed the bill that will set the “Don’t Say Gay” bill into law. The Florida state school system is scheduled to reevaluate the curriculum in June.

The “Don’t Say Gay” bill will go into effect July 1, just in time for the new school year.

This lack of representation that will be brought into the lives of students in Florida can severely harm them. They are fully capable of understanding LGBTQ+ topics. At that age, kids don’t hate, they love. They don’t care about who you love or what you identify as because they are young. It’s the parents of these children that teach them to hate or to oppose others unlike them.

Discussing these topics is not forcing sexuality upon students; it is educating the youth that there are people out there who they will meet who will be different from them, but those differences shouldn’t stop them from being friends.

By third grade, most children are 8, and some may even know that they are queer. By shutting this discussion out of the classroom, it will repress and harm them for the rest of their lives.

Many people say they do not want to expose their children to those “antics,” yet they will show their children Disney movies where there is always a kiss.

Those against the bill, such as advocates for LGBTQ+ rights, activists, and legislators, have said that it will harm these youths and that school should be a safe place for those who are learning about themselves. Many supportive teachers have brought comfort to their students by showing their support and creating a sense of safety that many students may not have at home.

The bill even allows schools to “out” students to their parents, which can lead to homeless and sometimes even death. There are 1.6 to 2.8 million homeless teens, many of whom identify as LGBTQ+, and many of them are homeless because their parents have kicked them out. Most teens don’t have jobs that can support them, so the fact that schools are forcing these students out of the closet is disgusting, and it should never be done.

While the bill bans these conversations from kindergarten through third grade, talking about sexualities and gender identity can be prohibited from every grade if deemed not age appropriate. What will schools deem as appropriate?

Illena Garcia, a supporter of the bill, has said “LGBT is not a permanent thing.”

Being gay or trans is not a choice that kids get to make. Even though being straight is the automatic norm, it’s a sexuality, and with that, it can’t be a choice. It is a permanent thing.

Members of the LGBTQ+ community often get pushed aside since they are not like others, so why do so many people still think that being gay is a choice? Why would anyone choose to not have their parents support them, lose friends and have a much harder life?