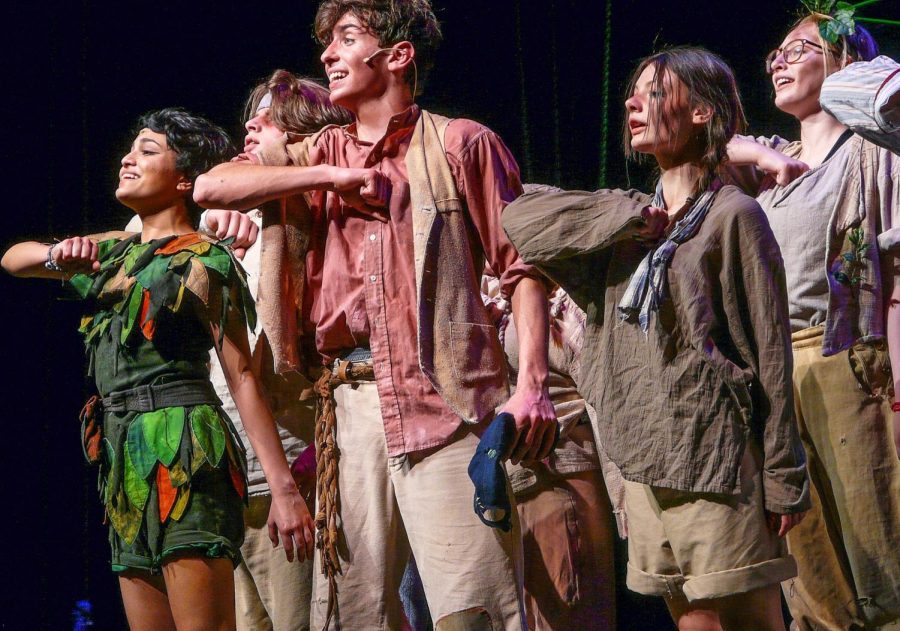 Peter Pan (Swara Modi) and the Lost Boys took audiences off to Neverland on Sunday, March 13.

Peter Pan’s March 13 performance is a Del Val musical that will never be forgotten.

From the actors flying around the stage to the lighting technician setting the mood of the scene, everything was perfect.

Del Val’s annual musical, directed by Ms. Jessica Severns, captured the magic of the beloved classic movie, Peter Pan, of course with the help of the actors, pit, production staff and everyone backstage.

One element that made this musical stand out from previous musicals was the actors and actresses flying around the stage. The cables that held them up and allowed them to soar blended into the set perfectly, so it really looked as if they were flying. It was creative how the characters’ “style” of flying matched their personalities; Peter Pan (Swara Modi) was confident and animated, while Wendy Darling (Jess McGlothlin) was very gentle.

From the choreography and singing, to the costumes and set design, the audience could tell Del Val has a talented arts program. The dance number “True Blood Brothers” was amazing, watching the actors dance and flip around the stage in time with the beautifully played accompaniment of the pit.

Each number helped develop the story and bring the characters to life. Two songs that stood out were “I’m Flying” and “Pirates March.” “I’m Flying” was special because it was the first song that had more than Peter Pan suspended in the air at one time, while “Pirates March” was great because it was the introduction song for Captain Hook (Hunter Leeds).

Captain Hook was very memorable, and that is definitely because of Leed’s ability to get into character. His presence on stage was humorous and “evil.”

Another display of talent was the pit, directed by Mr. T.J. Hayden. The audience could tell the musicians were just as ecstatic as the actors on the stage, especially during the songs “I’m Flying” and “True Blood Brothers.”

“We get to let loose for both numbers and they are as much fun to listen to as they are to play,” said Hayden.

The pit’s musical abilities and attention to detail truly added to the musical.

“My favorite moments were when they made weird sound effects [when the actors were sliding down the pole],” said Nina Rybansky, a Del Val senior.

The set design and costumes were also spot on. Typically productions with more sets are more interesting, however, the two designs worked well.

A small idea which bettered Peter Pan was making Nana (Hayleigh Marmorato), the dog, a larger size because it helped people in the back still see what was happening on stage. Another costume choice which the audience could appreciate was having the crocodile (Ronan Engel) crawl around on a skateboard.

Last but not least is the work of the production staff and stage crew; without them there would be no musical. The variety of lights added to the plot as it set the mood and gave the performance depth.

The efficiency of the stage crew, behind the scenes, made the whole play run smoothly. “It took around five days to get it [moving around the set] down pat,” commented Andrew Ronca, a member of the stage crew.

Overall the musical was very good, and each member of the cast and crew should be very proud of themselves.