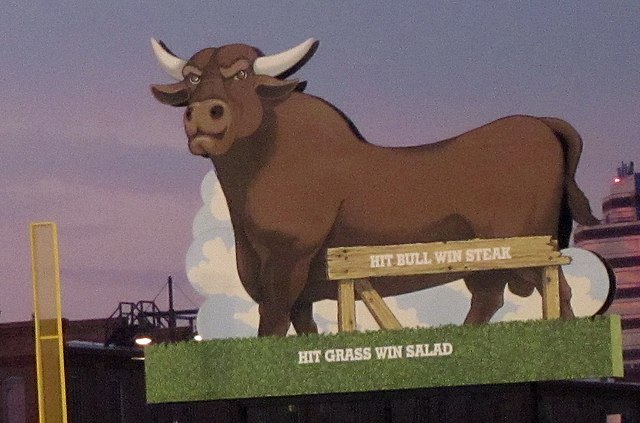 After all of the chaos of the offseason, baseball is finally back on April 7, and the greatest sport on Earth has had a lot of movies based on it.

For my list, I’m avoiding movies that have baseball scenes but aren’t baseball movies.

Before I get to the list here are some honorable mentions:

The Naked Gun: From the Files of Police Squad

This movie is hilarious, rewatchable and has aged somewhat poorly (OJ Simpson is the fourth lead). The best scene is definitely when they go to the baseball game to prevent a player (who turns out to be Reggie Jackson) from murdering the Queen. Frank Drebin, or should I say Enrico Pallazzo, played brilliantly by Leslie Nielsen, steals the movie when he plays the umpire trying to find out who the assassin-to-be is.

It should be a rule that every umpire has to act like Leslie Nielsen did in Naked Gun.

Most rewatchable scene: It’s a dead heat between Nielsen singing the national anthem, or at least trying to, and Nielsen impersonating the umpire.

I’ll be honest. I haven’t seen this movie in years, but I can’t leave this movie off the honorable mentions list. Walter Matthau is the coach we all had in little league, an alcoholic ex-ball player. The movie is quickly being forgotten because it’s not on any streaming services and it’s never played on TV. From what I remember, Matthau was good, but other than him, I felt the acting was weak, but what can you expect from a bunch of 12-year-olds?

Most rewatchable scene: Ya know, that one scene with the baseball players.

The Pride of the Yankees

This movie is arguably one of the best movies of all time. Gary Cooper plays Lous Gehrig who was “The Pride of the Yankees”. That name may sound familiar, after all, they named the disease he died of after him. He is the greatest first baseman in Yankees history and the second-best first baseman of all time.

So when he died in 1941, Yankee fans and baseball fans everywhere mourned the death of the Iron Horse. This movie came out a year after his death, many players featured in the movie played themselves. Babe Ruth, Bob Meusel, Mark Koenig, and Bill Dickey play themselves. Cooper delivers the performance of a lifetime and left people crying in theaters after he delivers Gehrigs’ famous speech at the end.

Best Quote: “People all say that I’ve had a bad break. But today … today, I consider myself the luckiest man on the face of the Earth.”

Personally, I think this movie is mediocre and is only remembered because of the nostalgia it brings people from that generation. The Fourth of July scene is classic, but the movie is a tad bit cheesy. In just about every scene they’re playing baseball, so it’s a good movie to zone out and relax.

Most rewatchable scene: The Fourth of July game.

This movie is so bad. I mean really, really really bad. Terrible from start to finish. The best thing about this movie is it highlights The Cape Cod Baseball League that starts every summer. It also spawned me going to Cape Cod every summer with my family from 2015-2019 to watch the games.

If trash was a movie, it would be called Fever Pitch. I don’t even want to talk about it because it’s about the 2004 Red Sox.

This movie should be good, especially because it stars Jon Hamm who was ruling TV with Mad Men, but the movie has no payoff and is as cheesy as cheesy gets.

Major League is on my list as one of the best baseball movies of all time (spoiler alert). The sequel is terrible, though. They replaced Wesley Snipes as Willie Mays Hayes with Omar Epps, the new character Rube Baker is poorly written and acted and the script relies too heavily on callbacks.

From For Love of the Game to Ed, most of them suck.

Okay, now we can finally move on to the real list.

Bull Durham has the most accurate representation of what it must me like for a player trying to make it to the major leagues, and for a player who knows he will never get back. The American Film Institute considers Bull Durham the greatest sports movie of all time, and so do I.

The movie…well, if you’re reading this article you’ve probably seen this movie so no summary is needed.

Tim Robbins becomes one of the biggest actors in Hollywood after the release of this movie, as does Kevin Costner and Susan Sarandon. The one-liners, the story and the acting are what make this movie.

What doesn’t “make” this movie is Tim Robbins delivery on the mound. Robbins plays “Nuke” LaLoosh, a promising pitcher who is being fast-tracked to the majors, so you would think he would throw better than my 9-year-old sister.

Bull Durham is perfect minus Tim Robbin’s pitching, who, again, throws like a little girl.

Best Quote: Nuke: “Sucker teed off on that like he knew I was gonna throw a fastball.”

The Natural and Bull Durham have similar themes: both star an aging veteran looking for one last shot.

Roy Hobbs, played by Robert Redford, was once going to be the next Babe Ruth, but due to getting shot in the stomach, his career was derailed. 16 years later, he ends up playing for the New York Knights.

The best thing about this movie might be that Redford’s swing isn’t half bad. In 1984, I really think he could’ve hit one out of the park in batting practice.

The cast is stacked: Robert Redford, Kim Basinger, Glenn Close, Robert Duvall, Wilford Brimley, Barbara Hershey and Richard Farnsworth. Redford was one of the biggest box office draws of the seventies and eighties, Duvall was an A++ lister, Brimley was throwing 95 in this movie with his one-liners and Close gave fans another reason to root for Hobbs to not take the money and hit the home run at the end (which he does).

In the movie, with his gunshot wound 16 years prior bleeding, he takes the Pirates hard-throwing rookie so deep that he shatters the stadium lights. The Knights win the game, and for the rest of his life, Roy Hobbs will walk down the street and hear, “There goes Roy Hobbs, the best there ever was in the game.”

Best Quote: I can’t narrow it down so here are my four best quotes from the movie:

“I shoulda been a farmer”- Wilford Brimley.

“There goes Roy Hobbs, the best there ever was in the game.”-Robert Redford.

“You’ve got a gift Roy… but it’s not enough – you’ve got to develop yourself. If you rely too much on your own gift… then… you’ll fail.”-Alan Fudge.

“I guess some mistakes you never stop paying for.”-Robert Redford.

Most rewatchable scene: The Final Homerun.

This movie also stars Kevin Costner, who would later go on to make For Love of the Game ten years later. After the opening, the movie starts with him hearing a voice that says, “If you build it, he will come.” It ends with him having a catch with “he,” who is Ray’s father, whom he had an adversarial relationship with.

This movie has it all; it’s a perfect movie except for two things: 1- Ray literally stares at an empty baseball field for months (even during Christmas) waiting for Shoeless Joe Jackson to show up. 2- Ray’s dad, who he has the catch within the end, throws like a wimp. The actor who played Ray’s dad even admits he had no idea how to throw or catch.

With Costner, Ray Liotta and James Earl Jones starring in a movie with a cameo by Burt Lancaster, how can you make a bad movie? The improv is great (the scene where Liotta nearly hits Costner with a line drive was not planned), and it’s one of the most quotable movies of all time (we’ll get to that riiiiiiiiiiight now).

Best Quote: There are too many to only pick one.

“This child’s choking to death.” -Lancaster

Shoeless Joe: “Is this Heaven?”

“If you build it, he will come.”-The Voice

“And Ty Cobb wanted to play…. but none of us could stand him when we were alive, so we told him to stick it.” [Ray Liotta laughs]

“America has rolled by like an army of steamrollers. It’s been erased like a blackboard, rebuilt and erased again. But baseball has marked the time.”-James Earl Jones.

“Hey, Dad? You wanna have a catch?”-Kevin Costner

Most rewatchable scene: People will come.

4- A League of Their Own

“Are you crying? Are you crying?! There’s no crying in online journalism!” -Me to myself after nobody reads a 3,000-word review on a movie nobody has seen in 20 years.

Hanks started off his epic movie run in the 90s with this movie (Look up his filmography from ’92-’00; it’s insane). This is yet another movie with a stacked cast: Hanks, Geena Davis, Madonna, David Strathairn, Bill Pullman, Rosie O’Donnell, Lori Petty and Jon Lovitz.

A League of Their Own is a movie about barrier breakers, a bittersweet story about a doomed league. Throw in Madonna and Tom Hanks taking a pee in front of the team for 45 seconds, you get a masterpiece.

Most rewatchable scene: There’s no crying in baseball!

There isn’t that much baseball played in this movie (I’m contradicting myself, I know), but it’s a near-perfect movie (although the last 15 minutes drag).

This movie, based on the book of the same name, changed the way I played fantasy baseball. I stopped looking at stats like average, RBIs and home runs, and started looking at OBP, wOBA, wRC+. I have since made the playoffs in the two seasons I’ve used the “Moneyball” strategy.

Pitt plays Billy Beane, the then General Manager of the Oakland A’s, as he tries to rebuild his team after Isringhausen, Giambi and Damon leave in free agency. He successfully utilizes Bill James’ strategy of prioritizing the stats that are overlooked, not because he wants to, but because he has to. The A’s are a famously poor team that, at the time, only had a payroll of $39 million against the Yankees who had a payroll of over $110 million.

Beane and his assistant GM Peter Brand, played by Jonah Hill, look for and sign players that are overlooked because of their looks, their personality and even who they are dating. They look for cheap players who can replace the big three they lost in the offseason. Why did Beane sign guys like Scott Hatteberg, David Justice and Jeremy Giambi? Because they get on base!

Best Quote: “There are rich teams and there are poor teams. Then, there’s 50 feet of crap. And then there’s us.”-Brad Pitt

Major League is probably the funniest movie on this list and might have been even higher on said list if they hadn’t made a ton of trash sequels.

The writer and director of this movie said he made it a comedy because that’s the only way it would be believable. At the time, the Indians were a terrible team who hadn’t won a World Series since 1948 and haven’t won one since.

The cast is, yet again, stacked: Tom Berenger, Charlie Sheen, Corbin Bernsen, Wesley Snipes, Rene Russo, James Gammon, and Bob Uecker. Sheen is the MVP of this movie, playing Ricky “Wild Thing” Vaughn, a hard-throwing but wild pitcher. Apparently, he could actually throw up to 90 mph during the filming. Snipes as speedster Willie Mays Hayes is great too, but it was disappointing to hear that in real life they had to use slow-mo because Snipes was actually pretty slow.

Quotable and rewatchable; what else can you ask for in a movie?

“[Expletive] you, Jaboo. I do it myself!” -Dennis Haysbert