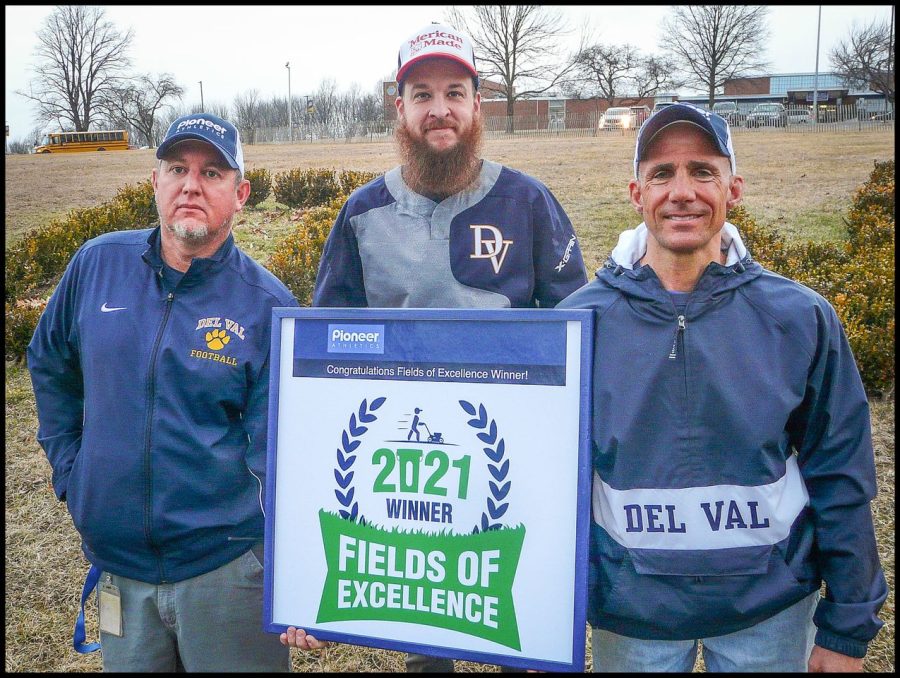 Delaware Valley Regional High School was recently selected as one of the 100 recipients of the Fields of Excellence national competition, all thanks to the hardworking grounds crew at the school: Ron Marinelli, Steven Sylvester and Brett Liskowaski.

All three of the crew members love their jobs for a variety of reasons: watching the faces of students light up when they see the well-maintained fields, having the ability to work outside every day and enjoying the great outdoors as their office.

“There are kids that come up to us and say thank you. For the three of us, that’s like our payday,” said Marinelli.

The grounds crew had no previous knowledge of any competition, but when they were approached by their representative from Pioneer Athletics about a new product back in November, they were encouraged to enter the competition.

“Steve, Brett or I never heard of any competition. We just figured we were doing this for the kids,” said Marinelli.

Months had passed, and the grounds crew forgot about the competition, but in early February, they received an email that they were one of just 100 recipients of the award across the entire country.

Nationwide, there were over 1,000 applicants for this award. Some of the applicants were minor league baseball fields, golf courses and the campuses of numerous colleges and universities.

Once Del Val entered into a global quarantine, with many weeks and months of distance learning, it became challenging to show school spirit. The grounds staff started experimenting with new field designs, working as a team, with each of them contributing different ideas. In the end, they could not have done it without one another; such creativity and teamwork is what set them apart from other competitors of this competition.

“When COVID hit we really felt bad for the students and I really think we stepped it up and did extra things,” said the grounds crew. “We wanted to help boost school spirit and morale for the students.”

For the grounds crew at Del Val, maintaining the property is not just a job; it is a labor of love.

e a lot of pride in it,” said Marinelli.