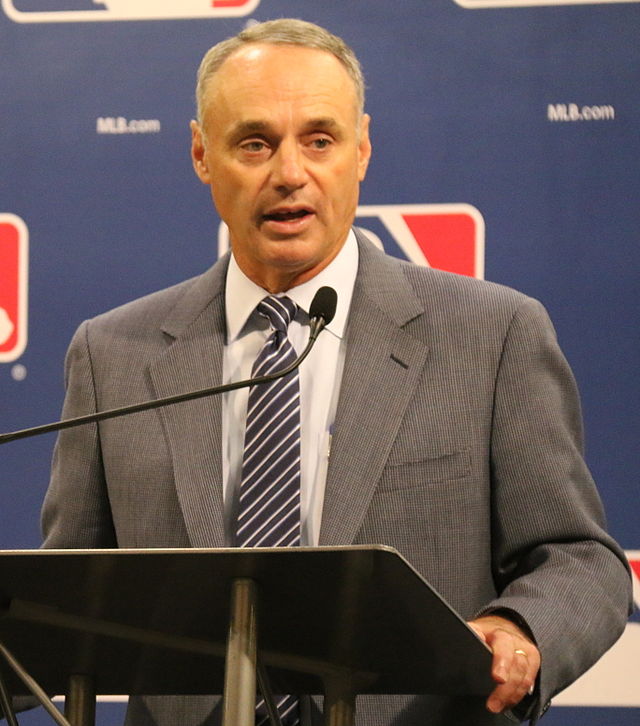 A lockout is different from a strike. A lockout is when the owners prohibit their players from playing baseball whether the players like it or not.

This lockout lasted 99 days, and has officially soured fans on commissioner Robert Manfred (who was already quite unpopular) and on owners. Fans blamed the players in large part for the ’94-95 strike, but this time fans rightfully blamed the owners.

Owners wanted the CBT (collective bargaining tax) to remain the same with a bump after a few years. They didn’t want to share league revenues with players, meaning money they get from ad revenue or World Series promotions. The owners wanted to keep the salary minimum where it was at $570,500, but the players wanted the minimum salary at $725,00 with it getting raised every year. The owners were, however, okay with the salary minimum being raised as long as the MLBPA accepted a 14 team playoff bracket (the union did not agree to that).

Even though an agreement has been reached and fans have a date for Opening Day circled on their calendar, the damage has been done. Manfred is no longer considered a commissioner for the players; he’s considered a mouth piece for the owners.

“We worked hard to avoid an outcome that’s bad for our fans, bad for our players, and bad for our clubs,” said Manfred. “Our failure to reach an agreement was not due to a lack of effort by either party.”

Except, the owners didn’t agree to sit down with the players for over a month because they believed the players would cave as the season approached. The players didn’t cave, making Manfred and the owners not only look foolish, but also unprofessional.

Danny Vietti, a writer for CBS Sports, spoke to The Delphi about the lockout.

“Both sides are acting awfully childish and immature,” said Vietti. “Both sides need to swallow their pride.”

According to Vietti, the players are not entirely off the hook. They didn’t cause the work stoppage, but they weren’t demanding to be at the negotiating table back in December.

Players fought hard to get rid of the clause that allows owners to “own” players for the first six years of their career. Players aren’t allowed to enter free agency until after their sixth year in the league.

The MLB is very much still an owner-run league, as opposed to what we’re seeing in the NBA where players are sitting out if they don’t want to play for their team. Vietti voiced his thoughts regarding whether or not the league will tilt its rules in favor of the players.

“As long as teams control players for the first six years of their careers, that will be tough to overcome,” said Vietti.

Public opinion regarding the lockout has heavily favored the players. 45% of baseball fans said they blamed the owners for not reaching a deal, while only 21% of fans blamed the players. In 1994, 47% of fans supported the owners, with only 26% supporting the players. Times have changed, fans are more informed now, and owners no longer have the support or trust of the fans. The league has a problem on its hands, and it’s the owners.

Greg Hartung, a Phillies fan and Del Val student, shared his thoughts about who was to blame for the lockout?

“Rob Manfred is the only right answer here,” said Hartung. “He is to blame for everything. Because he’s an idiot and doesn’t know how to run baseball. He doesn’t care about the players. All he wants is to save money and get ratings up, and he’s failing at that.”

Hopefully, the owners and players can continue to put their differences aside for the best sport in the world: baseball.