Why baseball is the greatest sport there is 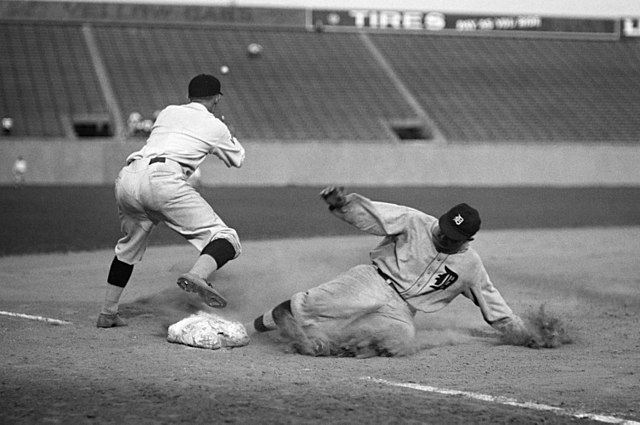 Ty Cobb, one of baseball's greats, slides into the base.

Mickey Mantle once said, “It’s unbelievable how much you don’t know about the game you’ve been playing all your life.”

Mantle’s quote is perfect because it’s true. One day you’re led to believe one thing, and the next you’re told to believe something else. Baseball has changed a lot over the years, but deep down it’s still the same game.

There haven’t been many constants in this world, but baseball has been one of them. I ripped James Earl Jones off a little with my last sentence, but my point stands. Baseball is a constant.

40 years ago, football was an entirely different game and the NBA was nearly bankrupt. Tennis is tennis, and golf was there for guys like Mantle to play once they retired.

Baseball is the greatest sport in the world, hands down.

Now, this doesn’t mean that I’m saying baseball is the hardest sport there is; football fans act like they’ve been called the worst name in the book whenever someone says it’s not the hardest sport in the world.

I can’t say hitting .400 in a season is harder; Tiger playing on a broken leg during the 2008 US Open; or Serena Williams winning the Australia Open while pregnant; or Tom Brady winning a Super Bowl at 43; or Isiah Thomas playing on a sprained ankle in the 1988 NBA Finals.

Baseball is a sport that brings people together, time and again. From Piazza and Jeter uniting New York after 9/11 to the Red Sox winning the 2013 World Series after the Boston Marathon Bombings, baseball is a game that has the ability to unite everyone for a couple of hours. The game allows people to unwind and shut their brains off to have their biggest worry be whether the manager will leave the starter in going into the 8th. Personally, knowing the Yankees are going to be on at 7 after a long day of doing SQ3Rs for AP Gov is a relief.

Every fan has moments that define their fandom. For my dad, those moments are Chambliss sending the Yankees to the World Series in ’76, deep to left in ’78, watching Donnie Baseball’s career for 14 years, watching the Yankees’ late ’90s dynasty, Game 7 of the 2003 ALCS and turning me into a baseball fanatic.

For me, the moments that define my fandom aren’t as great as my dad’s. He’s been alive to see the Yankees win seven World Series; I’ve been alive for one World Series win, but I was five so I don’t remember any of it.

The moments that define my obsession with the Yankees and baseball are listening (I was in the car at the time) to Derek Jeter get his 3,000 hit, Jeter getting a walk-off hit in his last home game in 2014, Didi’s game-tying 3-run home run in the 2017 AL Wild Card game, the Yankees’ 8th inning rally in game four of the 2017 ALCS, and Jose Altuve’s home run that sent the Astros to the World Series and the Yankees home in game 6 of the 2019 ALCS.

Every fanbase has their moments, whether good or bad, but we only like to think about the good. If we think about the bad, we get very angry. To quote Yoda, “Anger leads to hate. Hate leads to suffering.” I could sit around and think about game 7 of the 2001 World Series or the 2004 playoffs or the midges in 2007, but I won’t go down that rabbit hole again.

It’s hard to describe why baseball is so great. It just is. You can try and put time limits on the game and change the way it’s played, but ultimately, the game will always be the same. No matter what you do to it, baseball will always be baseball.

It’s a game that can entice anyone. I wasn’t alive for 95% of the great things that happened in Yankee history, but I still feel the excitement anytime I watch Posada tie the game off Pedro in Game 7 of the ’03 ALCS or the pain when Luis Gonzalez ended the Yankees dynasty in 2001.

I really do wish I wasn’t a fan of baseball whenever the Yankees don’t win the final game of the series (Moneyball reference, oh yeah). But for whatever reason, I can’t get enough of it. During the off-season, I watch random games I find on YouTube: important playoff games to random regular season games. That’s kind of weird, right?

Baseball isn’t a hobby of mine. It’s an obsession. I need baseball in my life, and that need tortures me. If one day I won the lottery but the Yankees lost later that day, my day would be ruined. When the Yankees lose, I get bummed out until they win again. What I suffer from is something millions of other fans suffer from.

Nothing can ruin my love of the game, that is unless Brian Cashman, the Yankees GM, doesn’t spend the 200+ million dollars in cap space to get top tier free agents and instead acquires middle of the road “maybe he’ll be okay” guys. Oh, wait.

Opening Day is April 7, and I can’t be any more excited. I know what this season will promise, and the odds are stacked against the promise of baseball euphoria, but as long as there’s a chance, I’ll be watching.