Will Smith vs Chris Rock 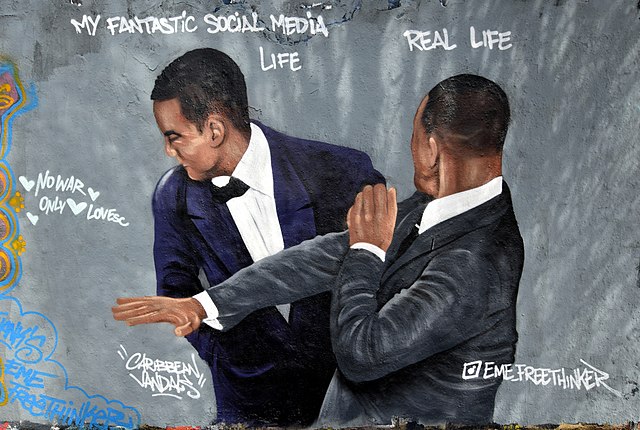 Will Smith's slap of Chris Rock has inspired a global reaction, including @eme_freethinker's graffiti.

At this point, almost everyone has heard about “the incident” at the Oscars on March 27, 2022. Actor Will Smith slapped comedian Chris Rock in the face after making a joke about his wife’s medical condition.

Live on air during the Oscars broadcast, Will Smith walked up to Chris Rock and, without hesitation, slapped him across the face. The audience and fans around the world were shocked by this sudden stunt. At first the audience wasn’t sure if this action was staged or not, but after some explicit words yelled by Will Smith, it was safe to say that this was not a joke.

Chris Rock is a renowned comedian, known for poking fun at people, especially Will and his wife, Jada Pinkett Smith. The first shot taken was at Jada on his show, ‘The Chris Rock Show’ back in 1997, where he poked fun at her role as a speaker in the Million Woman March.

The next shot was taken when Jada, now married to Will, boycotted the Oscars in 2016, calling her out saying she wasn’t even invited. He then joked about Will being nominated for his role in ‘Concussion,’ saying Jada was just jealous he was nominated for something while she was not. Chris Rock has had a history of conflict with the famous couple.

During the 2022 Oscars, Chris Rock made a joke about Jada’s bald head, who is bald is due to a condition called Alopecia Areata.

According to CNN, alopecia makes one’s immune system attack its own hair follicles, in turn, stopping hair from growing.

The exact joke was, “Jada I love you. G.I. Jane two, can’t wait to see it!” The joke was respected and laughed at by seemingly everyone in the audience, including Will Smith. The only one who seemingly didn’t find it funny was Jada.

Rock is a comedian, and comedian’s make a living off making jokes about others; he was simply doing his job. If it was a foul joke or not, Jada or Will simply could’ve talked to Rock after the show, instead of making a major scene and paying the consequences for it.

As of the time this article was written, Will Smith is now banned from the Oscars for ten years. Will Smith is still, however, allowed to keep his Best Actor award he was presented with around 40 minutes after the incident. Will Smith will not be allowed to attend virtually or physically, and he can’t vote as well.

According to the New York Post, Smith fully accepts his consequence and respects the decision.

He also apologized to everyone, saying, “The list of those I have hurt is long and includes Chris, his family, many of my dear friends and loved ones, all those in attendance, and global audiences at home,”

This incident is one of the biggest events in television history, not only because a physical and verbal assault was caught live during one of the biggest award ceremonies of the year, but also because it occurred between renowned actor Will Smith and comedian Chris Rock.

Even though Will Smith might’ve publicly apologized to Rock about his actions, he has yet to contact him individually. The comedian took the slap and still continued with his presentation of the award. Chris has since gone on to perform comedy shows days after being slapped.

The question now is: How will Will Smith bounce back from this incident, and will this affect his involvement in different movie projects?