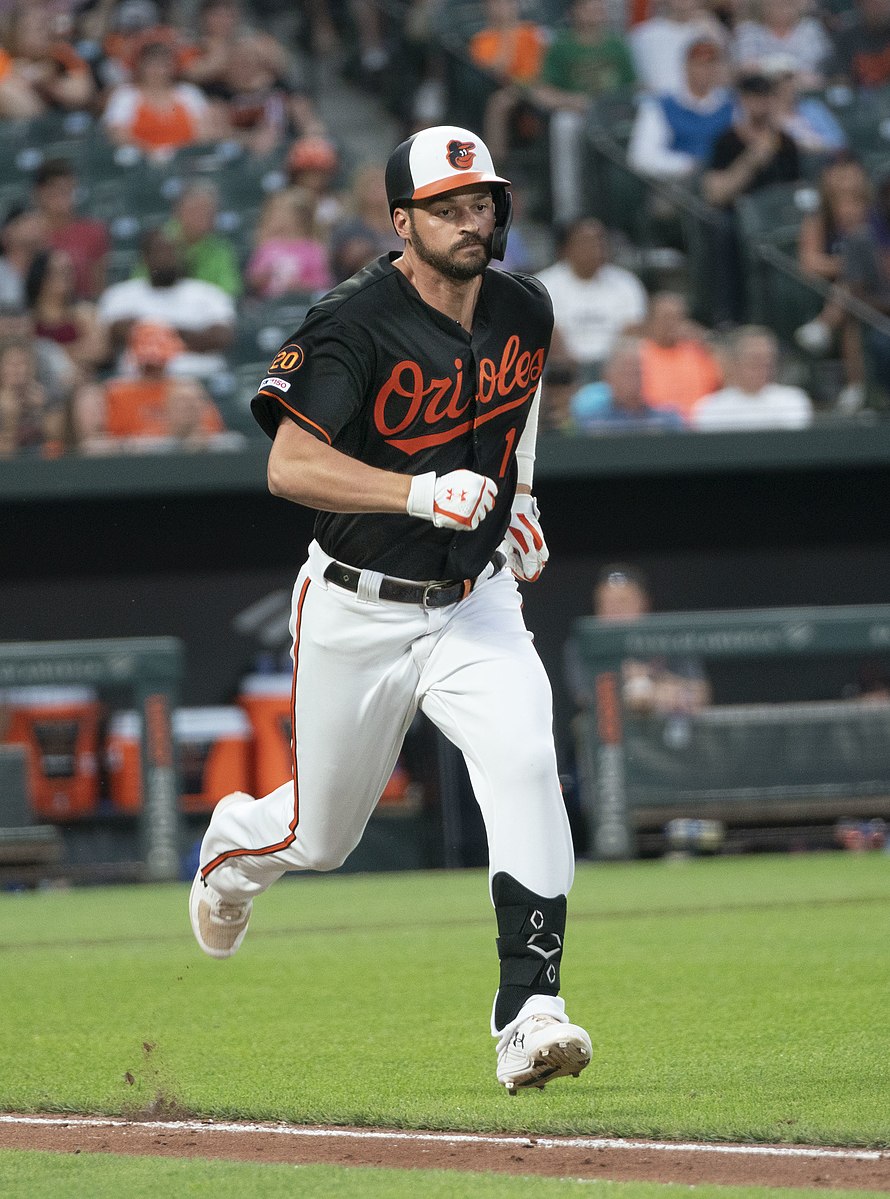 Photo via Wikimedia Commons under Creative Commons license
Trey Mancini will have plenty of work to do if The Orioles want to make it to the playoffs in 2020.

It’s hard to envision the Orioles improving on their record from last year even though they ended with a measly 54 wins. They traded away Jonathan Villar, who lead the team with 4.0 WAR (Wins Above Replacement), to the Miami Marlins and dealt Dylan Bundy, one of their top starters, to the Los Angeles Angels and got pitching prospects in return for both while not replacing them with anything but a significant downgrade.

The offense will be anchored by OF Trey Mancini, who is coming off of a 35 HR season, while Anthony Santander, Hanser Alberto and Renato Nunez look to be solid contributors as well. The pitching staff is led by John Means, who’s coming off of a good rookie reason in which he made the All-Star Game, but the rest of the rotation is rounded out by mostly mediocre veterans that don’t seem likely to help Baltimore improve on their league-worst ERA from last season.

The bullpen projects to be among the league’s bottom units again, and while there is significant help on the way in the team’s farm system, the Orioles will not be playoff contenders for at least a few more seasons, and another top draft pick is on the horizon for the organization. 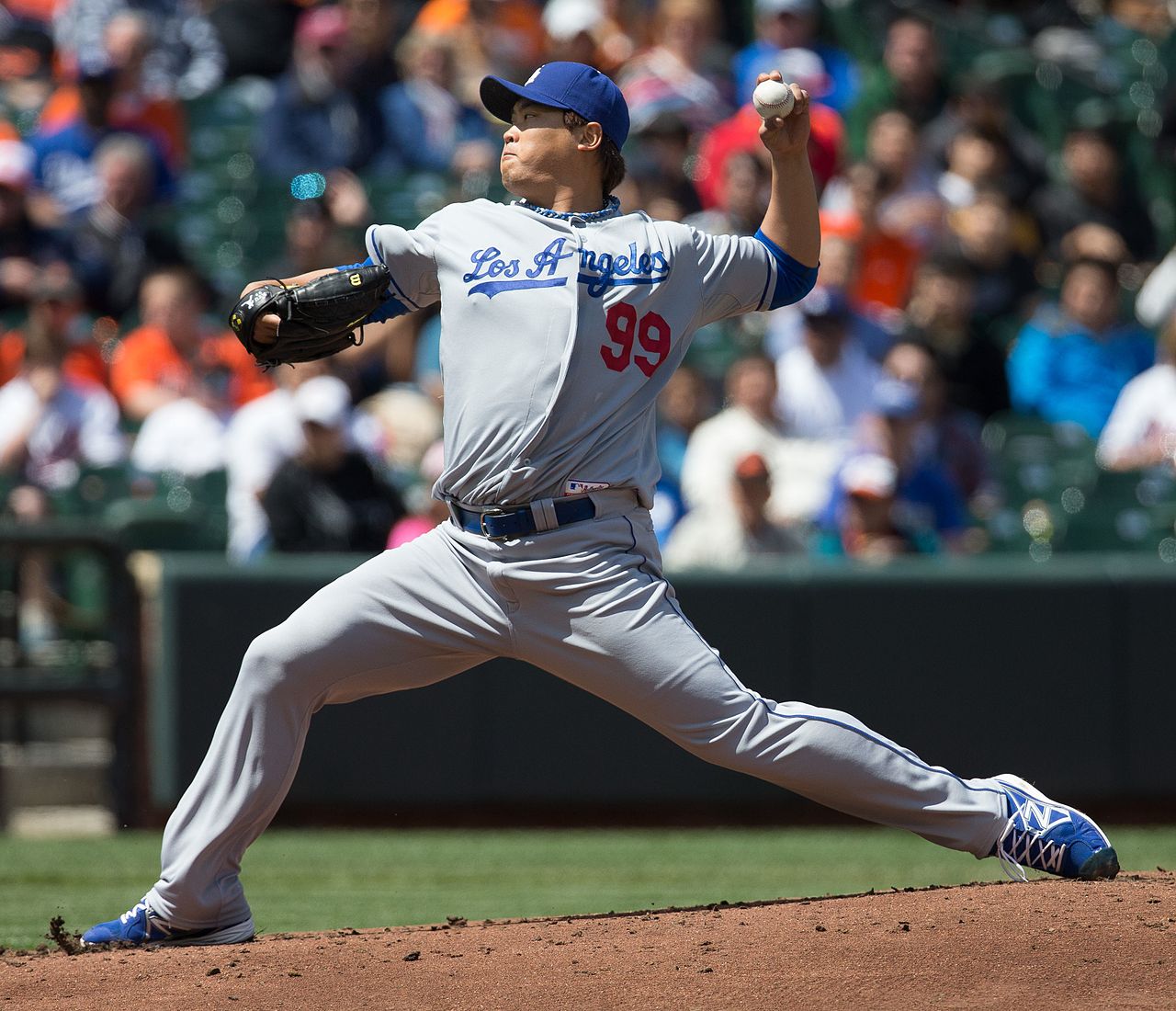 Photo via Wikimedia Commons under Creative Commons license
The Blue Jays’ trade for Ryu was a first step towards a 2020 playoff push.

The Blue Jays did a lot this offseason to try and improve on their disappointing 2019 season, including signing NL Cy Young runner-up Hyun-Jin Ryu to a 4 year, $80 million contract.

Offense will be the team’s strong suit, as it is powered by the young trio of Vlad Guerrero Jr., Bo Bichette and Cavan Biggio, with Guerrero having the potential of being a legitimate MVP candidate down the road. Lourdes Gurriel Jr., Randal Grichuk and Teoscar Hernandez round out the lineup while the starting pitchers outside of Ryu and Tanner Roark are question marks. The team has a shut-down closer in Ken Giles but not much else that can be counted on in their bullpen.

While the team has improved significantly from last season, it may not be enough to emerge out of the middle of the pack. 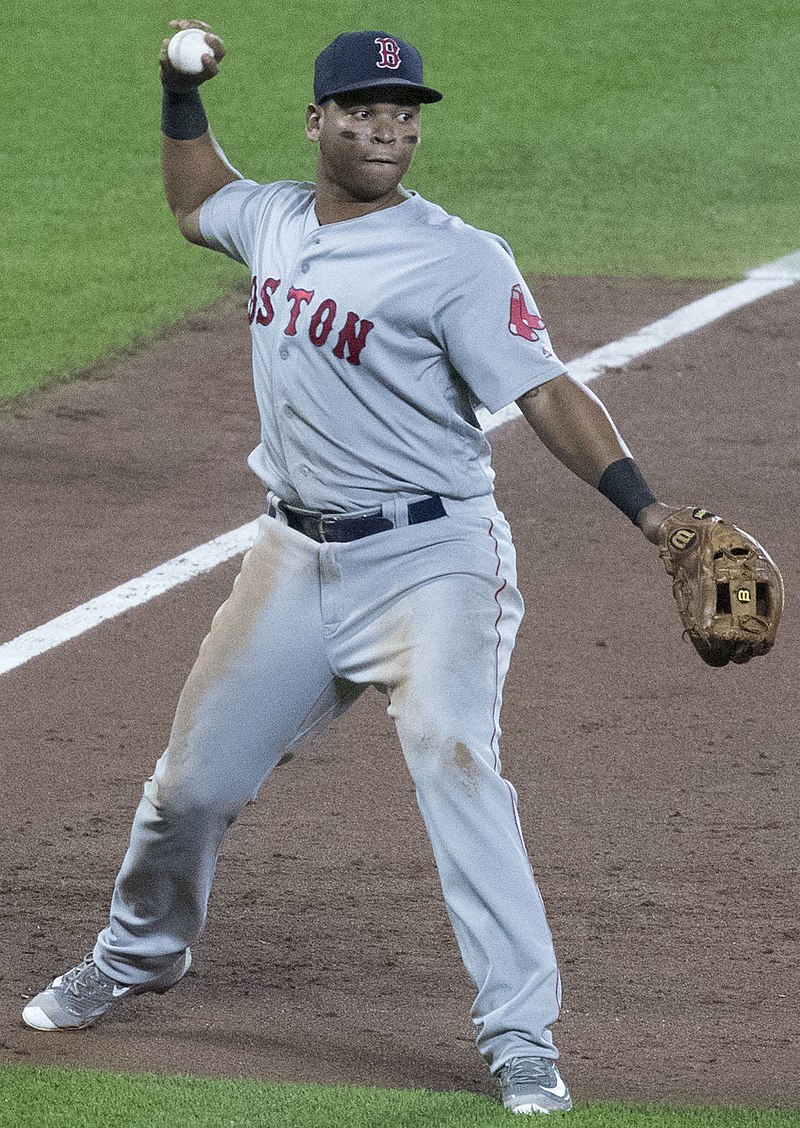 Photo via Wikimedia Commons under Creative Commons license
Rafael Devers will help to lead the Red Sox offensive attack as they challenge the Yankees for the AL East.

After winning 108 games and the World Series in 2018, the Red Sox fell back down to Earth in 2019 thanks to a bad bullpen and injuries to their frontline starters. Optimism is not high with Red Sox fans following the trade of Mookie Betts and David Price to the Dodgers in what many thought was a “cheap” move by Boston’s front office.

However, they still have solid pieces that can keep them afloat in the American League. The lineup boasts Rafael Devers, Xander Bogaerts and J.D Martinez, all of whom have 30+ HR potential and are All-Star caliber players. Alex Verdugo, Andrew Benintendi and Michael Chavis will all be good contributors for the offense as well, while Chris Sale (if he can stay healthy) and Eduardo Rodriguez represent a good duo at the top of the team’s rotation. There are reasonable doubts about the depth in this area, as Martin Perez, Matt Hall and Ryan Weber won’t win games consistently for Boston, but the addition of Collin McCugh as a hybrid starter/reliever will certainly help the team.

The bullpen cannot possibly be worse than it was last year, as Matt Barnes and Brandon Workman are a combination at the backend that the team should be confident in while the middle relievers should be solid enough.

All in all, expect Boston to be an 80-win team, but a mixture of injuries and lack of pitching talent will keep them out of the postseason hunt. 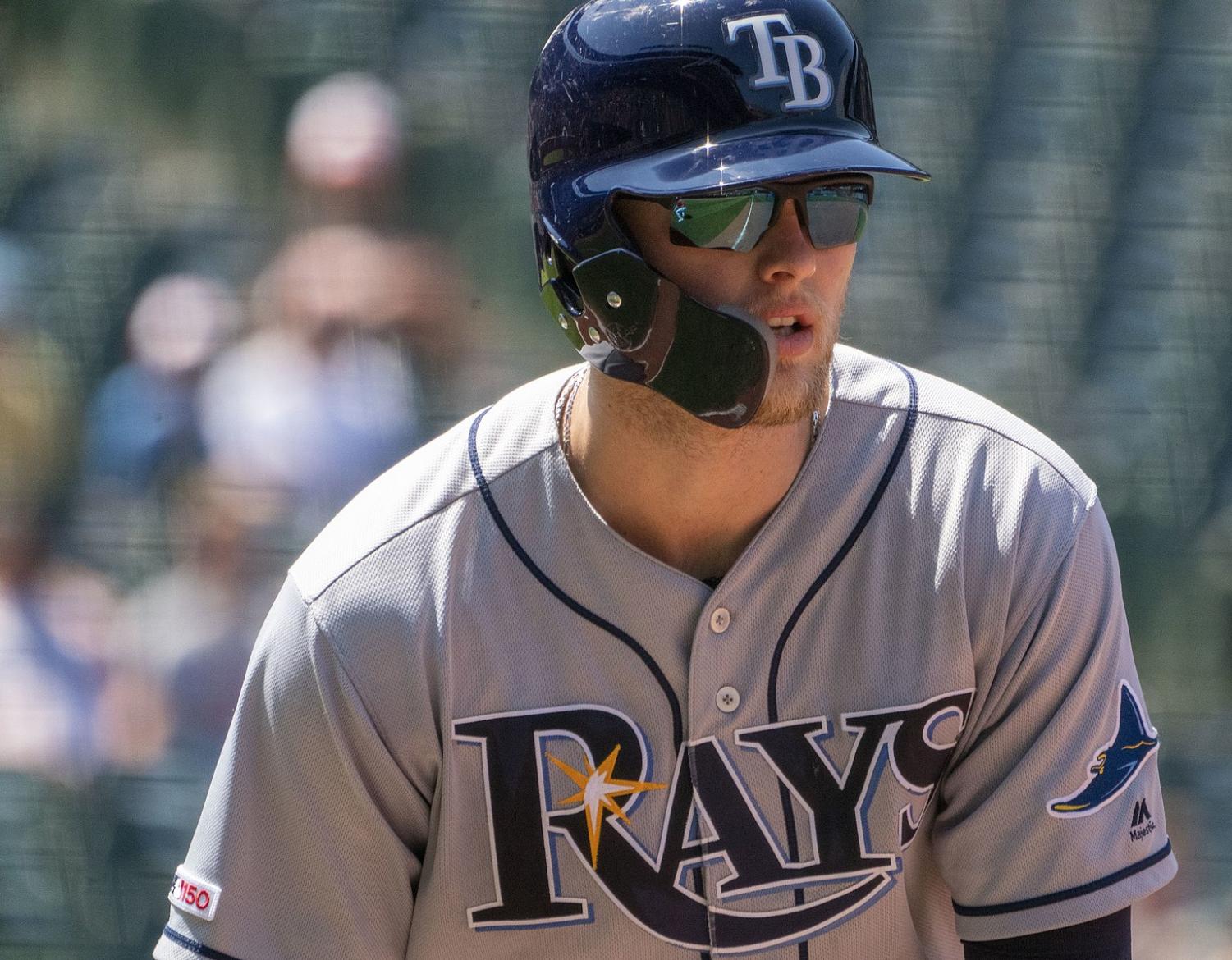 Photo via Wikimedia Commons under Creative Commons license
All Star Austin Meadows will help to lead the Rays’ charge toward the World Series.

The Rays, after winning the Wild Card Game and pushing the Astros to 5 games in last year’s playoffs, made a bevy of moves to retool their roster. They traded arguably their best reliever in Emilio Pagan to the Padres for a platoon CF in Manuel Margot, while also trading Tommy Pham to San Diego for a power-hitting OF in Hunter Renfroe and a prospect. They still have All-Stars Austin Meadows and Brandon Lowe at the top of their lineup while newcomers Yoshitomo Tsutsugo and Jose Martinez are in line to make a splash and make up for some of the losses that the roster suffered.

The team’s top 3 starters in Charlie Morton, Blake Snell and Tyler Glasnow are among the league’s best, and the bullpen should be in that category as well with the likes of Nick Anderson, Diego Castillo and Jose Alvarado, with each owning some of the nastiest swing-and-miss stuff in the league.

The Rays will be in contention for a playoff spot, and there’s an outside shot that they can nab the division from the Yankees if their injury issues continue far into the season. 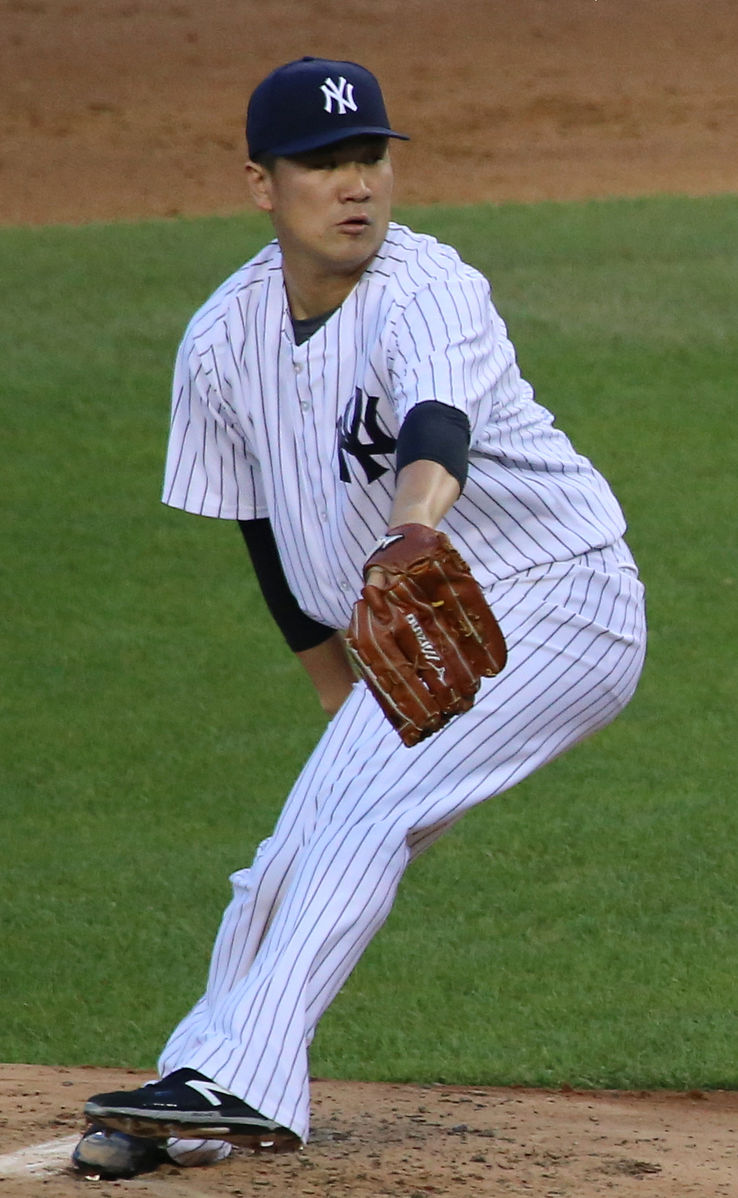 Photo via Wikimedia Commons under Creative Commons license
Masahiro Tanaka looks to strike out the AL East in 2020.

The Yankees will once again be a powerhouse in 2020. The signing of Gerrit Cole transformed their rotation, as he, Masahiro Tanaka and James Paxton (once he returns from injury) can match up with any other team in the playoffs, and they will be joined by Luis Severino at some point next year after he recovers from Tommy John surgery.

The offense has the chance to be the league’s best, as they are led by DJ Lemahieu, Aaron Judge, Gleyber Torres and Giancarlo Stanton. It’s unreasonable to expect players like Lemahieu and breakout star Giovanny Urshela to repeat the production of their career years from 2019, but having a healthy Stanton and Judge rejoin the roster after the first couple of weeks of the season would help offset that change in production.

New York’s bullpen will be incredible with guys like Aroldis Chapman, Adam Ottavino and Zach Britton at the backend, and their bench gives the team one of the deepest rosters in the league.

The Yankees should have no issue winning the division and stampeding their way towards the top record in the American League.