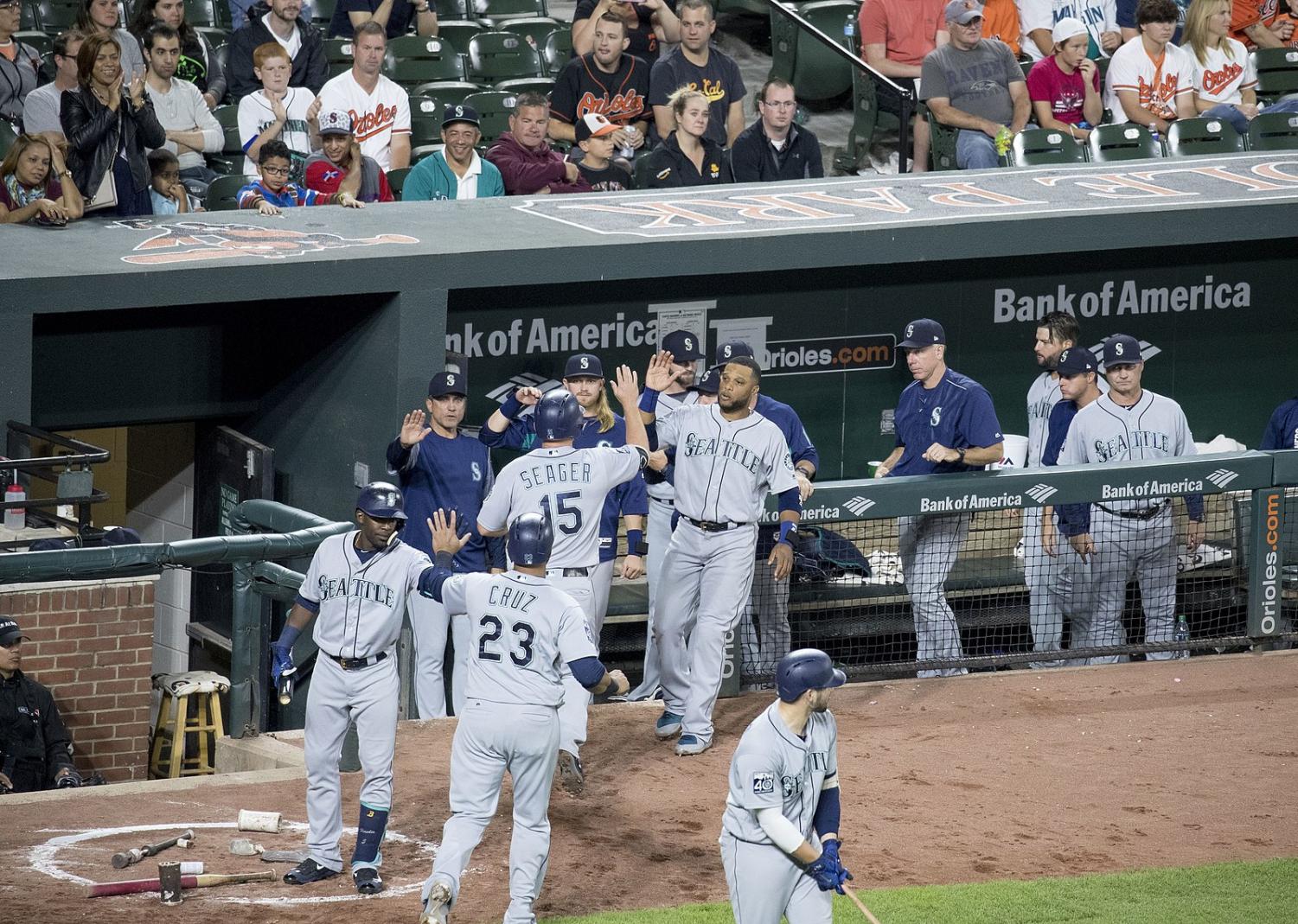 Photo via Wikimedia Commons under Creative Commons license
The Seattle Mariners might not have much to celebrate in 2020.

Following a blistering 13-2 start to the 2019 season, the Mariners fell apart and dealt a majority of their veterans, which signaled that they were going into a full rebuild. Seattle, who owns the longest playoff drought in the 4 major American sports at 18 seasons, has plenty of reason to be excited for the future, as top prospects Jarred Kelenic, Julio Rodriguez and Evan White have the potential to be one of the better cores in the MLB in a couple of seasons. As for right now, though, there isn’t a ton to look forward to.

The lineup is well-rounded, as they have speed-and-contact players like Dee Gordon and Mallex Smith, raw power players like Dan Vogelbach, and all-around hitters like Tom Murphy and Evan White. The rotation has some potential with the likes of Marco Gonzales and former top prospects Justus Sheffield and Justin Dunn, but the rest of the starters are essentially just keeping the seat warm for the team’s next wave of talent through the minors. The bullpen is largely made up of journeymen, and much like both the rotation and lineup, the team’s ceiling of 70 wins is pretty much set in stone.

It will be another long season for Mariners fans, which they have become accustomed to throughout the years, but there is light at the end of the tunnel for the league’s most success-deprived franchise. 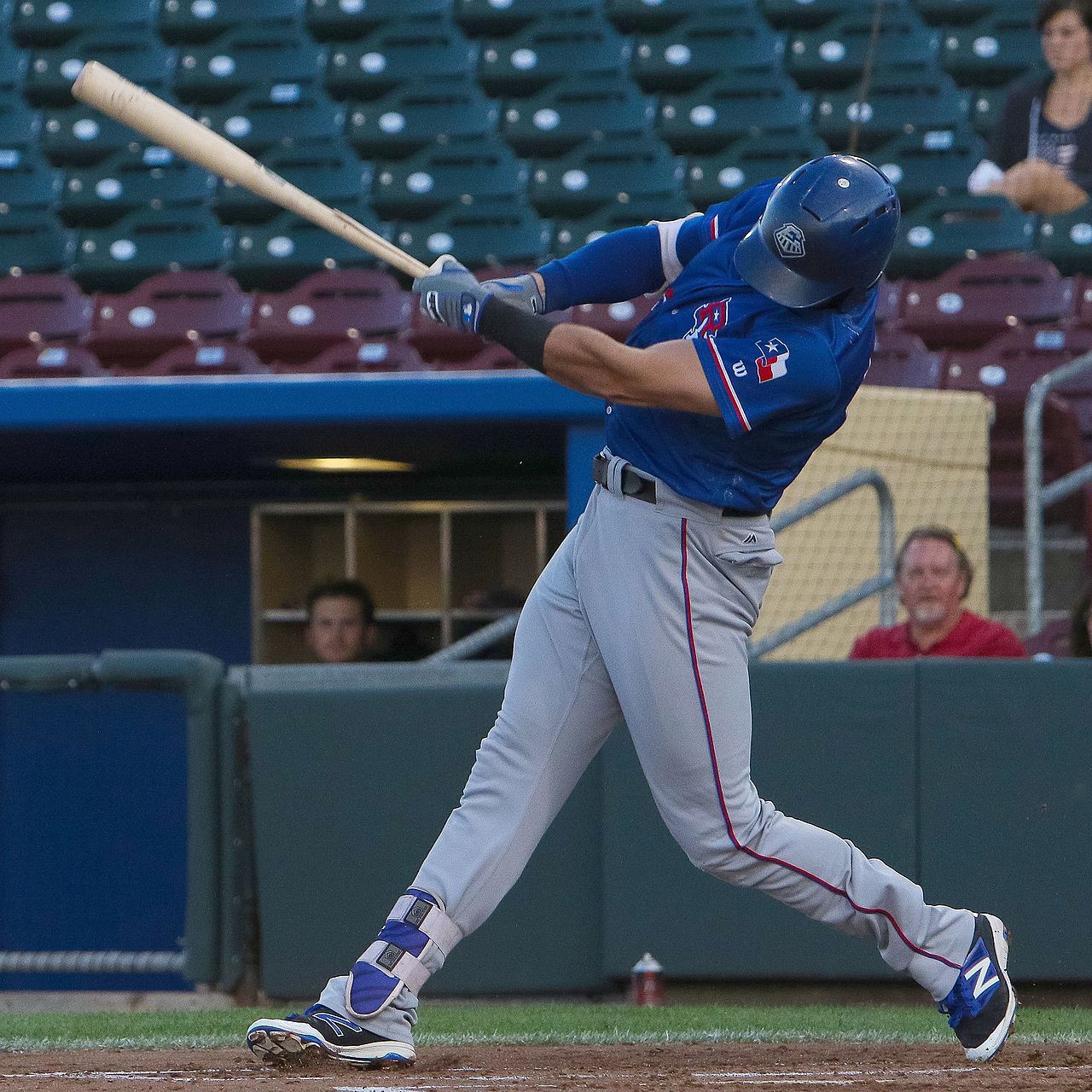 Photo via Wikimedia Commons under Creative Commons license
MVP candidate, Joey Gallo, may need to lead the Texans this season.

The Rangers are one of the more interesting teams in the league. Coming off of an off-season where they were in play, and even considered favorites at points, for the likes of Anthony Rendon, Nolan Arenado and Nick Castellanos to improve their offense, and their hole at 3B in particular, they only added Todd Frazier. Joey Gallo is an MVP candidate with his light-tower power and improved contact skills and Nick Solak has a chance to do some real damage with the playing time he gets, but the rest of the lineup is filled out with average-at-best veterans such as Elvis Andrus, Rougned Odor and Shin-Soo Choo, who have seen their best years pass them by.

The rotation, which was aided by the signings of Kyle Gibson and Jordan Lyles and the surprising acquisition of Corey Kluber from the Indians, is one of the deepest in the league and brings back Lance Lynn and Mike Minor with both coming off of career years. The bullpen is a humongous question-mark outside of closer Jose Leclerc with, once again, average-at-best guys filling it out and plenty more waiting in the wings.

Average-at-best is a term used to describe multiple facets of the team, but there isn’t a better way to encapsulate the 2020 Texas Rangers. 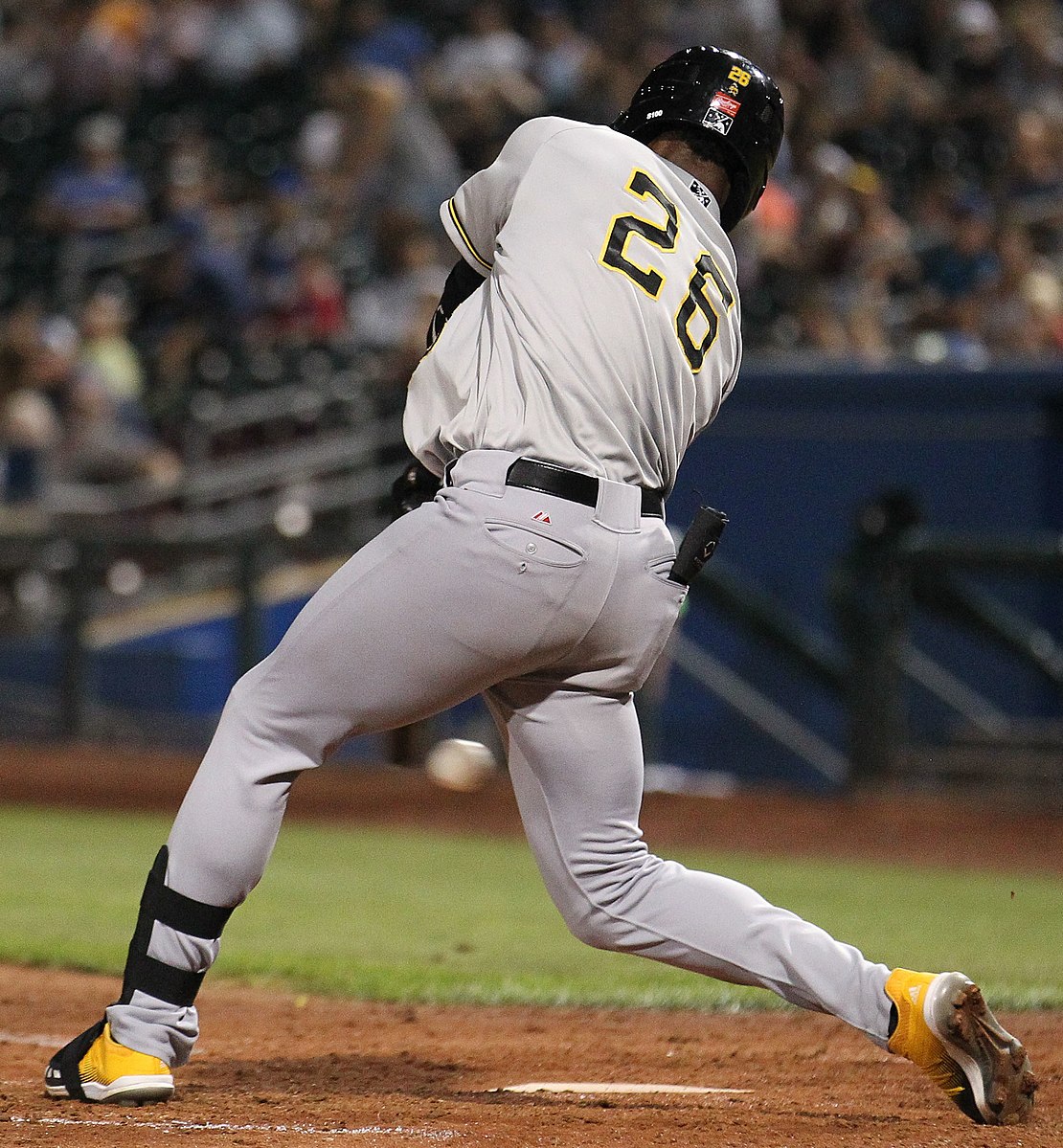 The Angels made one of the biggest splashes of the off-season, signing superstar 3B Anthony Rendon to a mega-deal that puts him next to Shohei Ohtani and Mike Trout in one of the league’s better lineups. Andrelton Simmons continues to hold down the fort as one of the best defenders in the league at SS, and Tommy La Stella will look to rebound from his injury and repeat as an All-Star at 2B. The rotation is lackluster and is likely to be the team’s downfall, even after veterans Julio Teheran and Dylan Bundy were added to it.

There are some intriguing young arms on the roster as well, including Griffin Canning, Jose Suarez and Patrick Sandoval. The bullpen is deep with middle-of-the road relievers, but it doesn’t have a lot of premier talent that can be counted on late in games.

The offense should be able to carry this team to an above .500 record, and will be aided by mega prospect Jo Adell’s presence sometime this season, but the pitching woes will hold the team back too much, and Mike Trout will see his playoff drought reach 6 seasons. 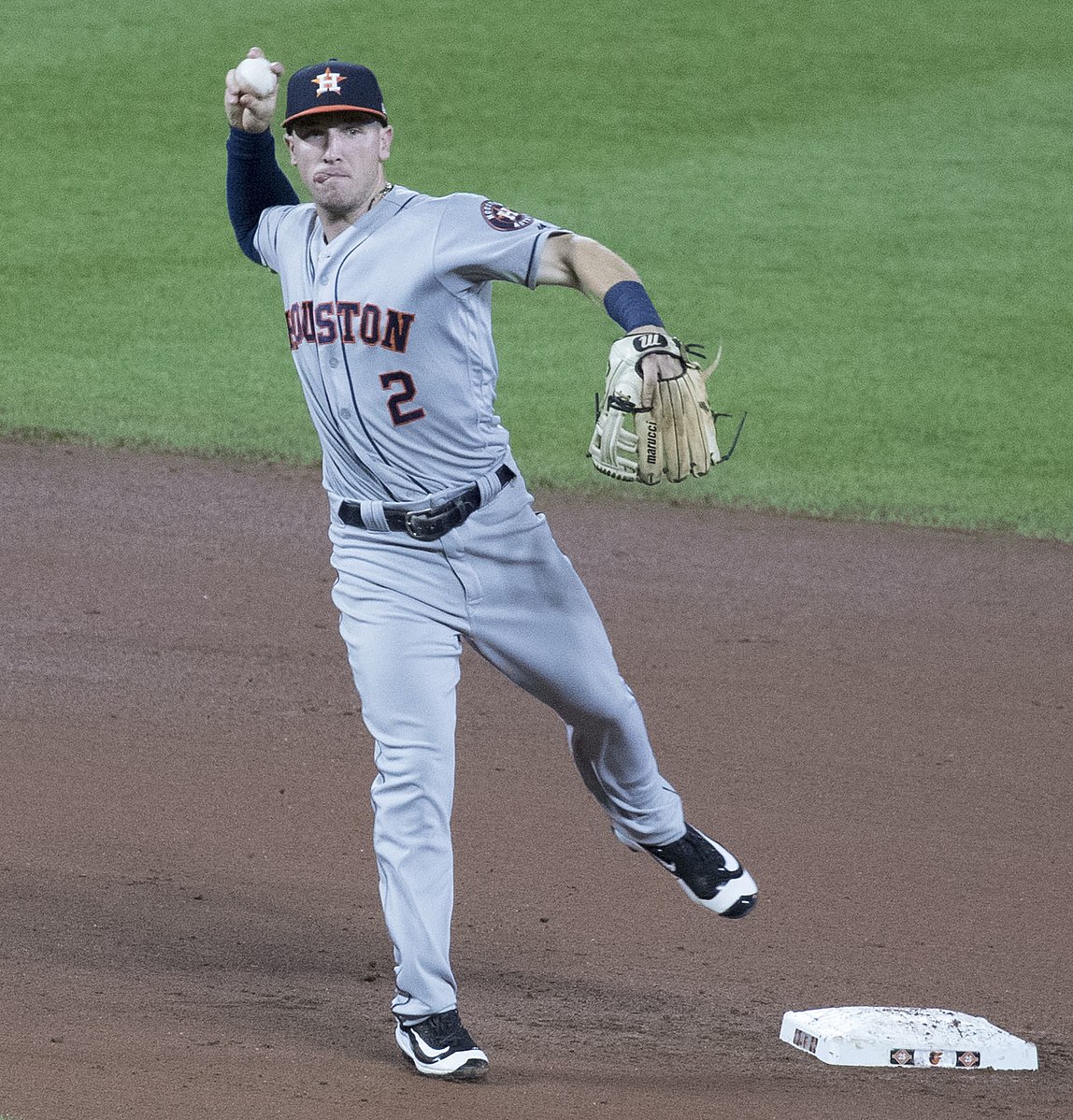 Photo via Wikimedia Commons under Creative Commons license
Alex Bregman needs to maintain his MVP caliber to carry the Astros back to the playoffs.

I could go on and on about the sign-stealing scandal, but there really aren’t enough words. The team was punished for their cheating, and some argue that the league should’ve been more harsh but it’s time to move on. The players will be booed on the road no matter where they play, and it should be a long season for them. However, that doesn’t change the fact that they are still uber-talented.

They may have the deepest lineup in all of baseball with the likes of MVP finalist Alex Bregman, 2017 AL MVP Jose Altuve, George Springer and 2019 AL ROY Yordan Alvarez. The reason I see regression is because of the loss of Gerritt Cole and Wade Miley in the rotation, aided by the fact that Houston didn’t bring in any new starters.

A full year of Zack Greinke and a healthy Lance McCullers Jr. should help soften the blow, but the bottom of the rotation is somewhat of a mess. The bullpen has plenty of talent and shutting down games shouldn’t be a problem, but the mix of a questionable rotation and the tension in the clubhouse means Houston won’t repeat their 100+ win seasons from the past few years, but they will still make the postseason as a wild card. 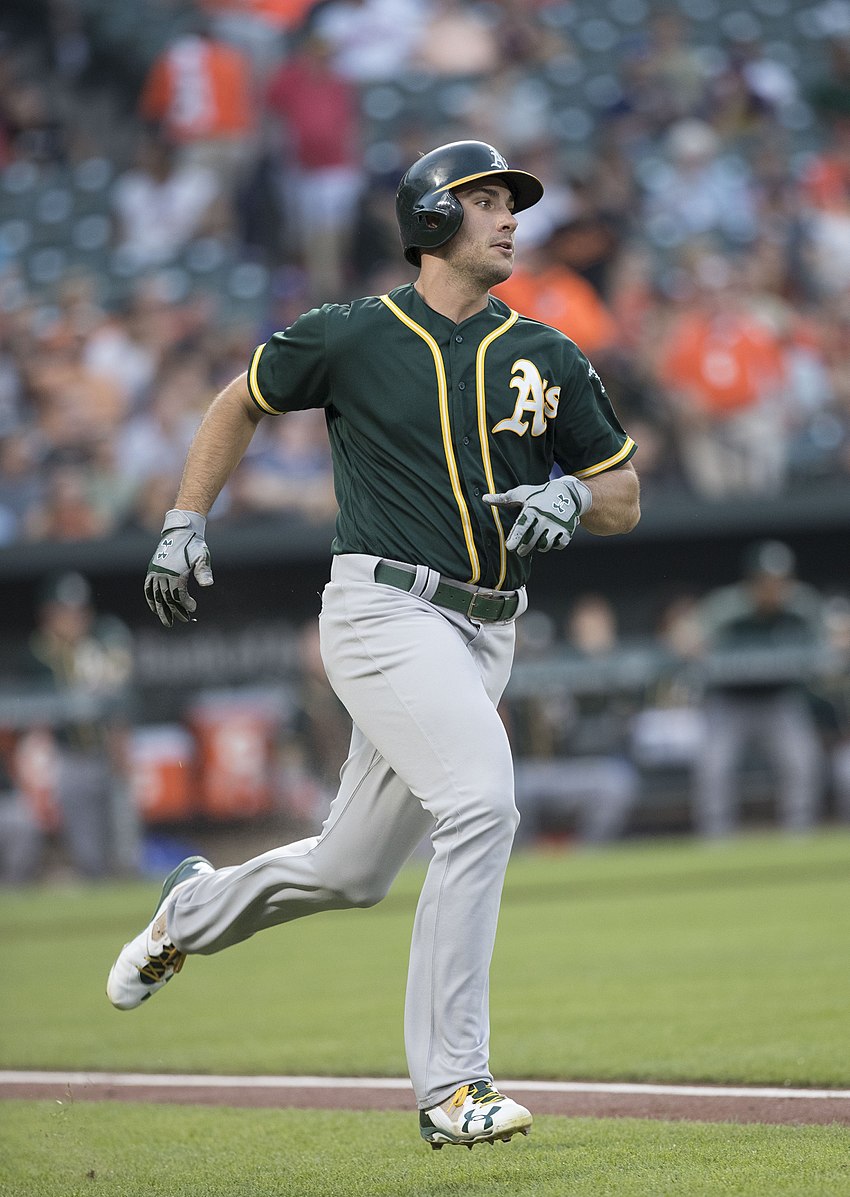 After losing in the Wild-Card game 2 seasons in a row, the A’s look primed to win the division. 3B Matt Chapman and 1B Matt Olson are two of the best players at their positions, while surprise 2019 MVP candidate Marcus Semien and rangy CF Ramon Laureano have made waves of their own and figure to be key parts of the equation for Oakland’s success in 2020 and beyond.

The starting rotation has the chance to be the best it’s been in years, as top prospects Jesus Luzardo and A.J. Puk will be given premier spots while Frankie Montas will try to build on the fantastic season he put together last season before being suspended for PEDs.

The bullpen is extremely well-rounded and is headed by All-Star closer Liam Hendriks and veteran set-up men Yusmeiro Petit and Joakim Soria.

The team has incredible depth and is also one of the better fielding teams in the league, which will go a long way in helping them clinch the division and reaching the ALDS for the first time since 2013.