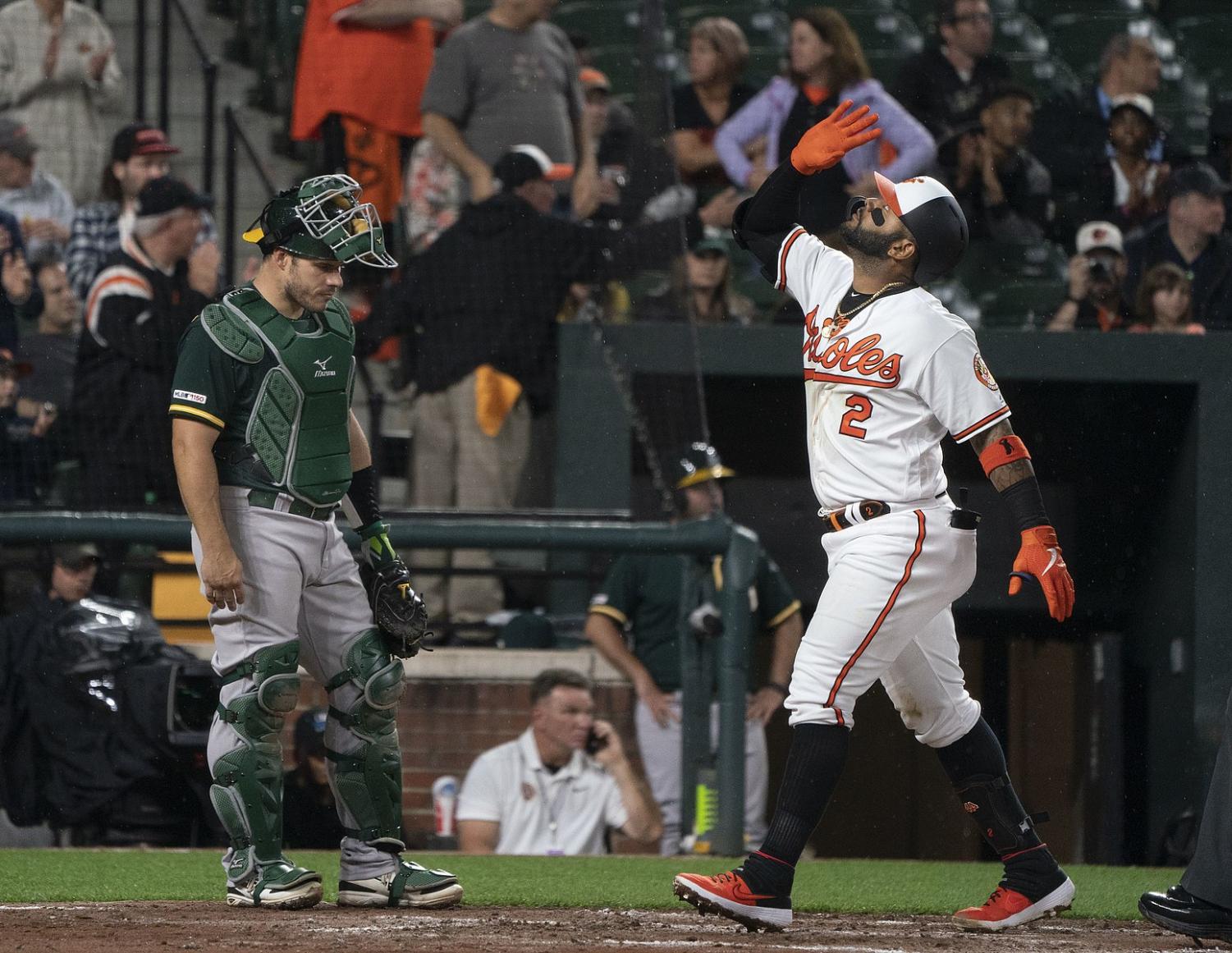 Photo via Wikimedia Commons under Creative Commons license
The addition of Jonathan Villar from the Orioles should bode well for the Marlins.

The Marlins have had a very good off-season and it’s gone mostly unnoticed. They traded for Jonathan Villar and gave up almost nothing, as well as adding Jesus Aguilar off of waivers while signing Corey Dickerson to a multi-year deal in an attempt to become more competitive in the short-term while not sacrificing the long-term at the same time. The veteran presence was much needed for a lineup that struggled all last season and lacked many consistent, proven contributors to major league lineups.

The rotation is one of the youngest in the league, and therefore is extremely volatile. We could see them break into the top-10 for starter’s ERA, or we could see them land at the bottom. The bullpen is made-up of a mish-mosh of veteran journeyman, young starters who only have a place in the bullpen, and a few proven players, such as Brandon Kintzler and Ryne Stanek.

The future is extremely bright for the Marlins as we see their top prospects inch closer to making their debuts, and we’ve already seen young talent thrive at the next level with the likes of Sandy Alcantara, Brian Anderson and Jorge Alfaro. They should be fun to watch, and they will increase their win total notably from last season, but it won’t be nearly enough to compete in arguably the toughest division in baseball. 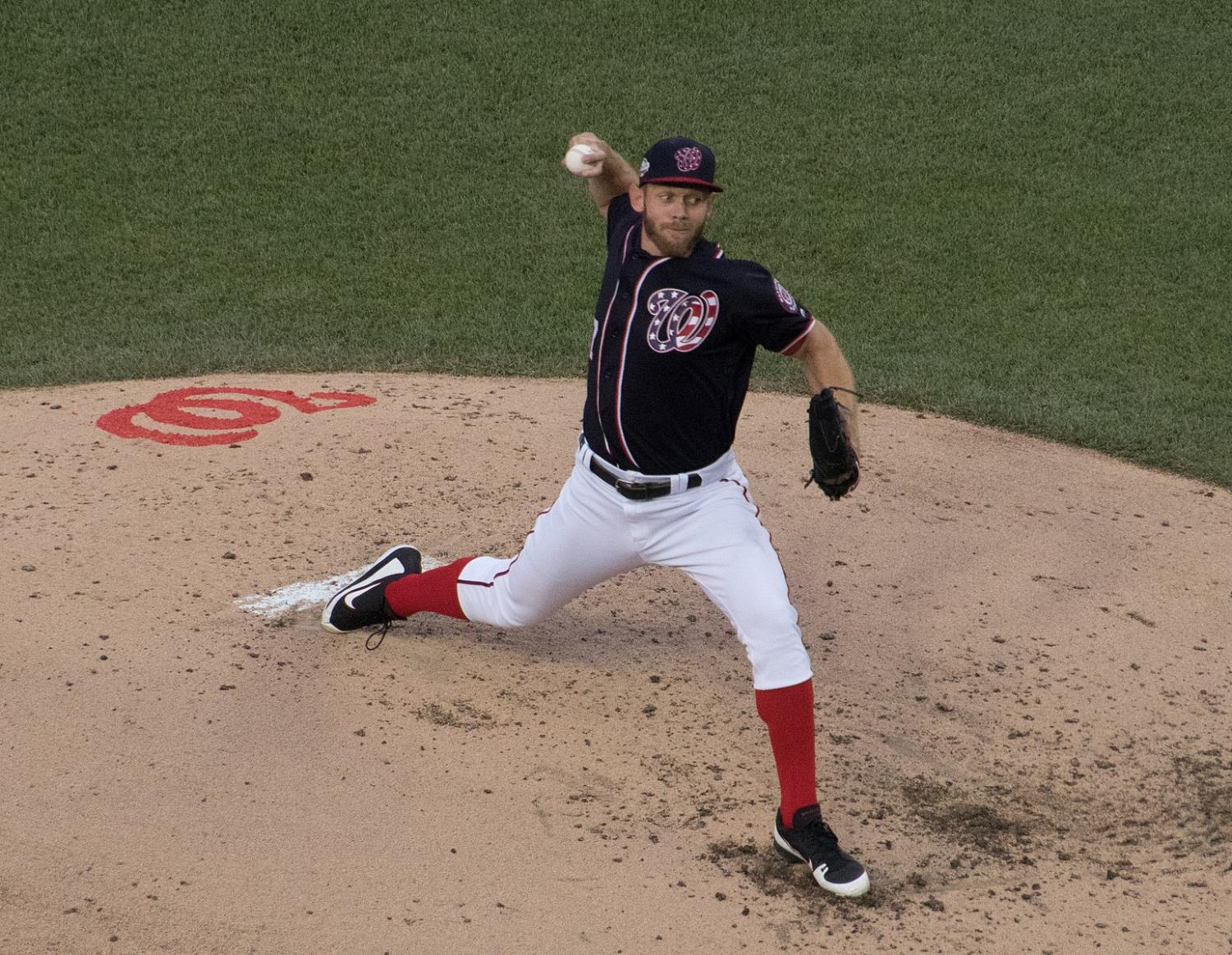 The Nationals followed the St. Louis Blues model by going from one of the worst teams in the league (19-31) to being crowned champions against a league powerhouse with all odds stacked against them. They were immediately met with a tough decision during the offseason, as they had to decide between choosing to retain Stephen Strasburg or Anthony Rendon.

The team decided to bring back Strasburg, who won the World Series MVP, on a 7/$245M deal, which let Rendon walk to Anaheim. Juan Soto, already a top player in the league at 21 years old, has very real MVP aspirations after a strong sophomore season and postseason, and he will be a cornerstone of the franchise for years to come.

He’s joined in the outfield by CF Victor Robles, one of the best defenders in the league, and SS Trea Turner, who will look to stay healthy after missing 40 games last season, rounds out the core. Washington added veterans like 2B Starlin Castro and power threat 1B Eric Thames to the lineup, as well as resigning WS hero Howie Kendrick, but the ceiling for the team’s offense isn’t particularly high with the loss of Rendon and a group of league-average producers outside of Soto and Turner.

The rotation will once again be potent, as Max Scherzer, Stephen Strasburg, Patrick Corbin and Anibal Sanchez represent arguably the best group in baseball. The bullpen should be better than it was last year with the addition of Will Harris (1.50 ERA in 2019) and a full year of Daniel Hudson, but the middle relievers leave a lot to be desired. There are some injury issues on the roster as well.

The Nats will be an above .500 team once again, but I can’t see them repeating the magic of last year without Rendon and an offense that is a bit of “an unknown,” as the same can be said for the bullpen. 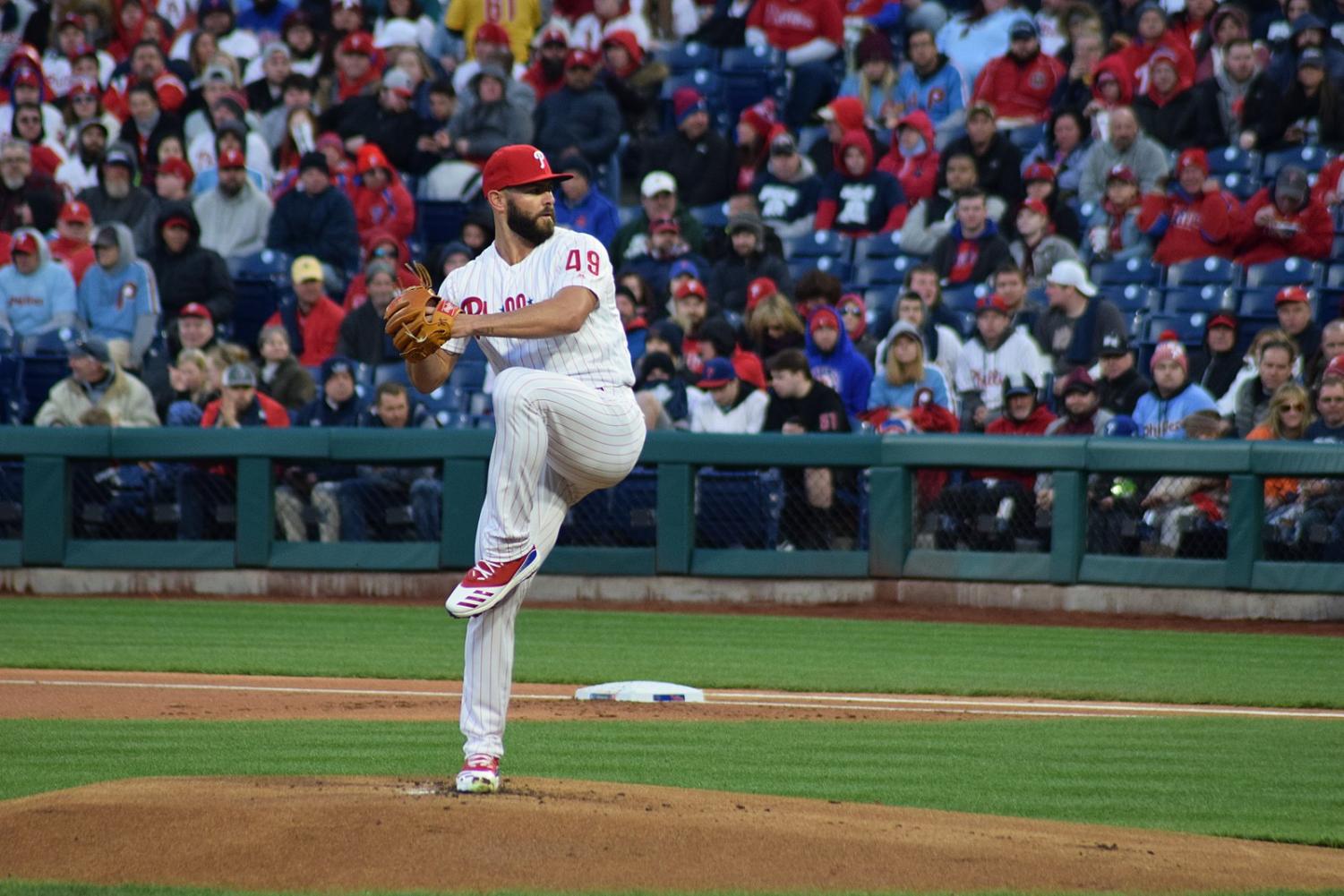 Photo via Wikimedia Commons under Creative Commons license
The Phillies need Jake Arrieta to live up to his contract as they chase the 2020 World Series title.

Coming off of a disappointing season in which they were supposed to be competing for the NL East after signing Bryce Harper late in the off-season, the Phillies started off the winter with a bang by hiring former Yankees manager Joe Girardi to take over that same spot in the place of Gabe Kapler. In addition, they signed SP Zack Wheeler to a 5-year deal and SS Didi Gregorius to a 1-year deal to add an intriguing upside to the lineup while helping Gregorius rebuild his value after an injury-riddled 2019 season.

The rotation still doesn’t stack up against the Phillies’ competition in the NL playoff race, but the duo of Aaron Nola and Wheeler at the top is scary for the team’s competition. #3 starter Jake Arrieta has one year left to prove he was worth the big contract given to him before the 2018 season, while the bottom of the rotation will be a mess until top prospect Spencer Howard makes his debut. The offense has incredible potential, as Bryce Harper, J.T. Realmuto and Rhys Hoskins all should be All-Star candidates in July while Gregorius, 3B Scott Kingery and former MVP Andrew McCutchen, who’s returning from a torn ACL, all can be above-averages presences in the lineup as well.

The depth is still lacking despite Philly’s attempt to sign a group of below-average veterans to minor league deals, but it could be aided by top 3B prospect Alec Bohm at some point. The bullpen is decent at best, but it lacks shutdown players at the backend. However, there is a group of solid veterans in the middle. The offense will be counted on to carry this team, and I think they will live up to the task.

The presence of a new manager, along with an experienced pitching coach in Bryan Price, will win the team some games after the Kapler disaster, as the pitching will be solid enough to earn the Phillies a playoff spot by virtue of the 2nd Wild Card for the first time since 2011. 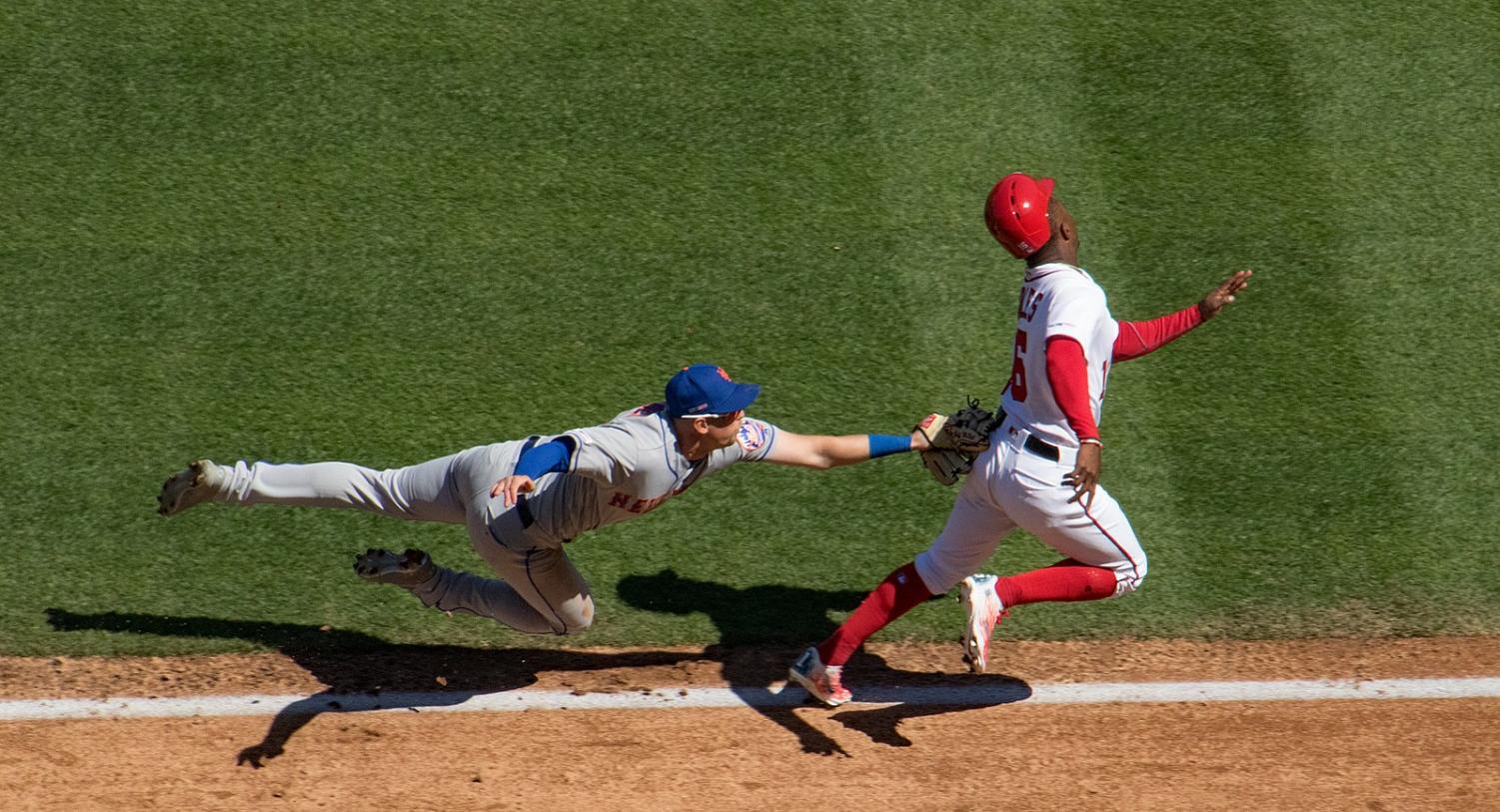 Photo via Wikimedia Commons under Creative Commons license
Jeff McNeil’s extra effort made him an All-Star in 2019.

Last year, the Mets were on a crash course for their third straight below .500 finish until they went on a miraculous run from the end of July until the middle of August that took them to several games above .500 and a half-game behind the 2nd Wild Card spot. They eventually fell back down to Earth but still finished the season on a strong note, as they had the highest record of any non-playoff team in the National League.

They return the duo of 2019 All-Stars Jeff McNeil and Pete Alonso, the reigning Rookie of the Year after his record-breaking 53 HR season, to the middle of the lineup, where they will be joined by All-Star caliber RF Michael Conforto and 2B Robinson Cano, who looks to rebound from his mostly disappointing 2019 season. J.D. Davis and Dom Smith will look to build off of their career-best seasons and will be strong contributors to the Mets offense, but their roles depend on the status of Yoenis Cespedes. If Cespedes can stay healthy and play 120+ games this season, he can be the big bat in the middle of the lineup that the Mets have missed and would be a much-welcomed spark plug for the organization. Jacob DeGrom will head what could be the league’s best rotation as he tries to win the Cy Young Award for the third year in a row, while Noah Syndergaard and Marcus Stroman round out a top-3 that could rival any other around baseball.

The bullpen, which was the downfall for the team for most of the season last year, got stronger during the off-season with the addition of former Yankees set-up man Dellin Betances, who signed a 1-year deal with options to give the Mets a big name that has proven himself in his role. Former All-Stars Edwin Diaz and Jeurys Familia will look to rebound off of their worst seasons of their career while Seth Lugo and Justin Wilson return and give the team dependable options in the late innings.

If the team can stay healthy, there’s no reason that they can’t be a contender in the NL, as they boast one of the better all-around pitching staffs in the league and an offense with a bevy of weapons. 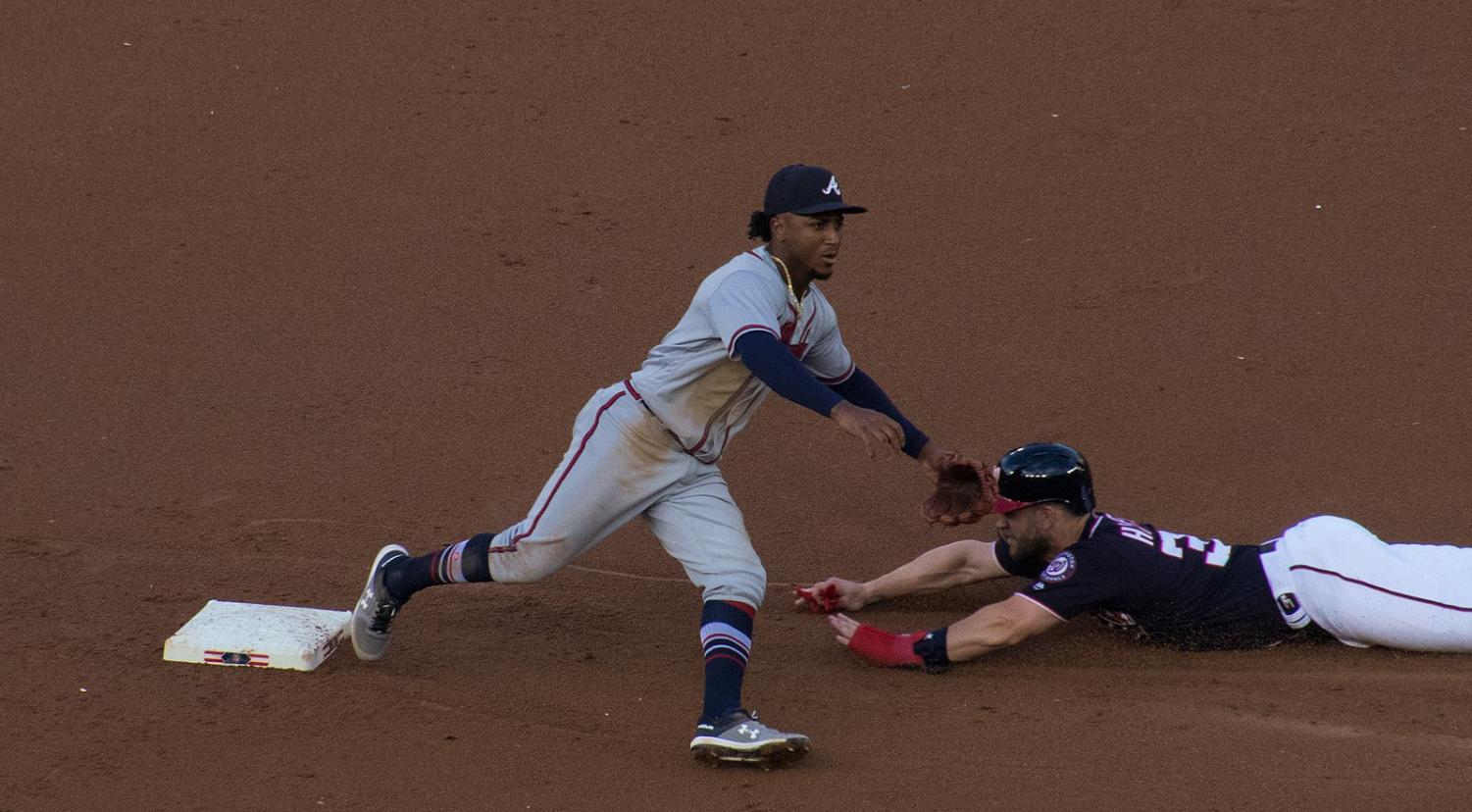 Photo via Wikimedia Commons under Creative Commons license
Ozzie Albies looks to help defend Atlanta’s title as the best in the NL East in 2020.

The Braves were the quickest team out of the gate this offseason, signing shutdown reliever Will Smith, C Travis d’Arnaud and accomplished starter Cole Hamels. They followed these moves up by signing a big bat in Marcell Ozuna to help beef up the middle of the order following Josh Donaldson’s departure to Minnesota. Ronald Acuna Jr., Ozzie Albies and Freddie Freeman join Ozuna to create a dangerous core in the middle of the lineup, as there is a legitimate chance that all 4 can be All-Stars in 2020.

Mike Soroka, coming off an All-Star season as a rookie, heads the starting staff along with Max Fried, whose curveball is one of the better secondary pitches in the league. The rotation is rounded out by Hamels (once he returns from injury), Mike Foltynewicz, Sean Newcomb and former superstar Felix Hernandez, who will be pitching for the first time without a Seattle Mariners uniform on.

The bullpen is solid throughout, and the combination of Will Smith, Shane Greene and likely closer Mark Melancon should have little issue shutting down games. Atlanta is only going to continue to get better with the amount of premier talent they have in the upper levels of the minor leagues, which is a scary thought considering the talent they already have on the active roster.

The offense will be the driving force towards a third straight NL East title as they look to break their streak of 19 years without a playoff series win.